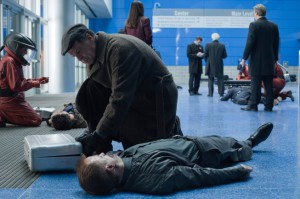 As FRINGE enters its Season 4 homestretch with the first of a two part season finale “Brave New World – Part 1,” the series finally brings all the season’s disparate pieces to the fore and the real villain finally emerges.

Before we get to the nitty gritty, here’s a brief recap. For some time, we’ve known that villainous David Robert Jones (Jared Harris) has been up to some pretty bad things. He’s been creating hybrid humans and crafting a sort of modern-day Noah’s Ark as he’s been attempting to collapse both our universe and the Over There universe into a third universe – one where he and his new altered beings will co-exist.

Most of his plans have been thwarted, or altered due to the Fringe division, but in “Brave New World” Walter (John Noble) discovers the truth – this is not Jones’ plan, but rather that of William Bell (Leonard Nimoy) who is very much alive.

It’s great to see the return of Nimoy in this role – and to have him playing evil so deliciously is a real treat.

The episode begins with a nano-technology-esque virus that makes its victims spontaneously combust if they exert too much energy. During this process, the Cortexiphan Olivia (Anna Torv) had been subjected to is starting to manifest powers in her she didn’t think existed. She’s able to control people and make them do things. It’s quite a big discovery, and one that ultimately leads to Jones’ demise before the episode is over.

Other plans Bell and Jones have set into place end up splitting the Fringe team up in order to stop them – one of which finds Walter and Astrid (Jasika Nicole) following his lead of where he thinks William Bell is (no one else believes him when he says he’s convinced Bell is alive).

This results in Astrid being shot (it’s unclear if she’s dead, though come on, she can’t die) and Walter and Bell having a great moment reuniting which will have even more of a pay-off next episode.

FRINGE continues to surprise and “Brave New World” is no different. It’s engrossing, well-made science-fiction that doesn’t pander and filled with the kind twists and turns few shows like this are able to pull off successfully and consistently.

It’s fantastic Fox has given the series a 13 episode Season 5 to wrap things up – and sadly, like last year’s CHUCK, the show is exiting far too soon. Then again, it’s a miracle a show like this has lasted five seasons, so fans have that to be grateful for.