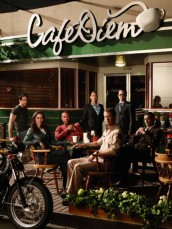 We’ve got the 20-member crew of the Astraeus kidnapped by Beverly Barlow (Debrah Farantino) and being kept in some sort of trance state in which they think they’re back in EUREKA four years after the launch. Only because Allison accidentally found herself locked on board when the launch was taken over, there are actually 21 people under Barlow’s control and care. So now we find out in “The Real Thing” that the purpose of the kidnapping is to keep these folks in their virtual world and throw theoretical problems at them so that they can come up with all sorts of new and useful things, because apparently they aren’t doing enough of that at Global Dynamics. The problem is that there are a few glitches in the virtual world technology and Holly Martin (Felicia Day) and Allison (Salli Richardson-Whitfield) are starting to notice it. Actually, so is Grace (Tembi Locke) who can’t figure out why her husband Henry (Joe Morton) doesn’t want her reviewing the launch records – which she, as captain, feels obligated to do.

Unfortunately, the plan is that if someone figures out what’s going on, well, that person is toast because you can’t just be unhooked from this thing or you’ll die. Yes, we’re foreshadowing.

However, we do shortly get back to the real world, where it has, in fact, only been a month since the failed launch. Jack (Colin Ferguson) and Henry are still trying desperately to find a trace of the ship, as is Allison’s son Kevin (Trevor Jackson, II). So while the Department of Defense has called off the search – odd how that had happened in the virtual world last week. Too bad Senator Wen (Ming Na) no longer has the resources to continue the search.  Jack isn’t ready to give up, nor is Kevin, who just happens to have borrowed the components he needs to build an even more sensitive tracking mechanism.

The story keeps flipping back and forth between the real world and the virtual world. In the virtual world, Allison somehow unleashes a dragon among the genetic experiments and Zane (Niall Matter) designs and builds a fabulous new net gun that captures the dragon. Barlow is delighted even if the project has gone a little off-track. Barlow is reminded that a mysterious “She” is who they’re answering to and She doesn’t like deviations. See where this is going yet?

Sure enough, in the real world, Jack and Andy have to steal one last component and get arrested for their trouble. Fortunately, Jo, whose walkabout hasn’t been as enlightening as she’d like, arrives back just as Jack figures out why they can’t find any trace of the ship – they’re looking in the wrong direction. They aim the new trace detector lower and find the ship’s tracks – right to a warehouse on the coast of some sort. Just in time for Senator Wen to come up and try to re-arrest Jack and Andy.

They hurry off to find the crew and do find the ship, but they were just minutes too late to find the kidnapped crew, even though their virtual beds are still in place, which really has Jack wondering. He hurries back to GD to look one more time at the hologram of the launch and realizes that not only were the kidnappers were warned, it was Senator Wen who did it.

Back in the virtual world, Holly slowly realizes that she is, indeed, been brain-washed into believing in the virtual world and tells Jack about it. And outside her mind, we see Senator Wen mercilessly disconnecting her from the machine. Barlow warns her that Holly will die, but that doesn’t matter. Holly is disconnected and killed. And Barlow, who has killed before without a tremor, does seem to be having some guilt feelings about this one.

So the next question is how many episodes do we have before the crew is rescued. One has to hope they’re not going to drag the kidnapping story line out too long. But this is the last season, so who knows how they’re going to wind it up.