doctor who the power of three 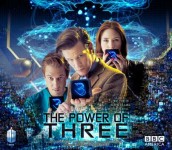 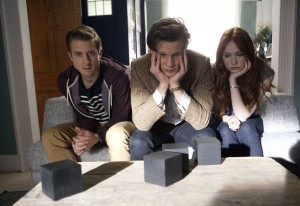 In the fourth episode of DOCTOR WHO Series 7, “The Power of Three,” the Doctor (Matt Smith) faces one his most unusual adventures: living at home with Amy (Karen Gillan) and Rory (Arthur Darvill). Mysterious black cubes have turned up all over the world, people have collected them and taken them to work and to their homes, and the Doctor and UNIT are concerned that this may be the slowest extraterrestrial invasion in human history. The Time Lord elects to stay for a while to see what happens, but meanwhile his married companions contemplate the struggle they face in balancing an existence of chaotic time travel with an even greater challenge – the daily routine of a normal life.

What could have been a far more satisfying two-parter is instead presented as a single episode that, while still entertaining and having more than its share of nice moments, feels less like another great episode in a solid recent run and more like this mini-season’s first true missed opportunity. Probably the biggest problem is the introduction of what should have been a fantastic character that then wasn’t really given enough chance to breathe. Jemma Redgrave brings all the dignity and emotion – as well as an almost uncanny family resemblance – to her role as the late Brigadier Lethbridge-Stewart’s daughter Kate, now heading a version of UNIT that she has somehow skewed more toward a greater reliance on science, due in no small part to the Doctor’s long-term influence on her father. It’s a beautiful nod to the past and a great opportunity to examine UNIT from a new perspective…and then it really just amounts to a few guys with guns dressed in black and a nameless tech guy in glasses watching monitors. Kate only turns up in a few scenes, is great in all of them, but you can’t help but feel that a two-part structure would have seriously improved this strand of the story and given her a chance to feel more like a character and less like a placeholder.

The other issue is the story itself, particularly the resolution, which builds up suspense all the way through only for the Doctor to resolve the entire “slow invasion” with a literal wave of his magic wand/sonic screwdriver. Some reviewers are already saying “ah, but the story isn’t the point, it’s a character piece.” Perhaps…but can’t we have both? Must we really sacrifice one for the other? Again, two episodes would have enabled the pacing of the cube story to open up and build to a more satisfying conclusion. As for Steven Berkoff in his wonderful but extremely abbreviated appearance, he’s sadly wasted although does very well with what he’s given.

Still, although this isn’t as good as the show has been in the last three weeks, it still has more than its share of satisfying elements, like continuing strong performances from the main cast and Mark Williams back again as Rory’s dad Brian. As with Chibnall’s previous script, some of the strongest elements are the amazing lines of dialogue that sum up entire themes in a single sentence, such as Rory’s “What you do isn’t all there is” and the Doctor’s “I’m not running away from things, I am running to them, before they flare and fade forever.” Smith even gets a very Tom Baker-esque speech about the indomitability of the human race and a touching bit about having lost companions in the past.

As for the general style of the episode: in this media-saturated era where the cycle of nostalgia has grown increasingly short – the ’90s and even the early ’00s are already back with a vengeance (whither last month?) – can it be that on the eve of celebrating DOCTOR WHO’s 50th anniversary, the show is already demonstrating a loving interest in something as recent as Russell T. Davies’ 2005-2010 stewardship of the series? If so, this reviewer has no problem with it, since the results are a nice blend of that period’s focus on earthbound invasion tales with a twist unique to the Eleventh Doctor era. Real world physicist Brian Cox pops up to expound on the cubes, newscasts keep us abreast of developments, and there are even other references to that era via cube-mouthed creatures (how did they fit into this anyway, we never really get a satisfactory explanation for them or the little girl robot sent to observe) that evoke memories of gas mask zombies, and a bit about the Doctor getting a left heart jumpstart that sees Smith channeling his inner Tennant. Brian also asks for the couple to come home safe like Jackie and other parents often did back then. As for that rushed resolution, didn’t some folks say that too was an element of the RTD era (not one I agreed with that often, but still…)?

“The Power of Three” is strong on character, light on story, and just doesn’t seem like it should have to choose one over the other. Tonal shifting makes for an uneven experience, but there are some nice statements about Amy and Rory choosing stability over uncertainty, and the ways in which humans can be such indiscriminate magpies and “early adopters” (maybe you’ll rethink getting in line for that next iPhone one day), beautiful design from the deceptively simple cubes to the ship lurking above the planet, and a clever adaptation of the “ant bait” approach to pest control applied to more intelligent creatures…namely, us. There’s a silly comedy montage that doesn’t work too well, a very bitter line reading of “Twitter” that works very well indeed, and a quick gag about Zygons in the 1800s that might make you feel as if there was a better episode that we just missed. In the final scene, we’re told that “the power of three” was the key to triumph, which must make all the previous Doctor/single companion teams feel pretty slighted now.

Next time, we’re already at the end of this short little mini half-season prior to the year’s Christmas special. It’s New York City and Weeping Angels and a tearful goodbye to the Williamses…for anyone that still has a tear to shed for them. Myself, I’m throwing a party with balloons. Oops, “spoilers!”

The Dork Side: To be or not to 3-D?
Exclusive Interview: Lucy Hale chats the return of PRETTY LITTLE LIARS...
Interview: Katharine McPhee makes a SMASH with the Season 1 finale
Blu-ray Review: HALLOWEEN – 35th Anniversary Edition