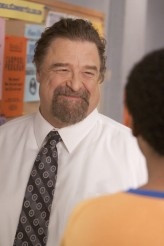 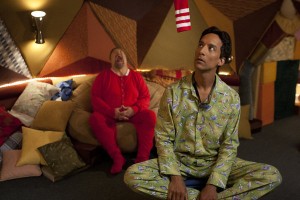 CHUCK was shameless and appreciative of their association with Subway. The sandwich company was incorporated into the fabric of the show – which, along with the fans, was integral in keeping the series on the air as long as it did.

Now COMMUNITY is biting the Subway hand that feeds with its hilarious new episode “Digital Exploration Of Interior Design.”

A new sandwich shop is opened in the Cafeteria and it’s a Subway. This gag is played to the extreme when a student, who has changed his name to Subway and is one of the company’s corporate shills, falls for Britta (Gillian Jacobs).

It goes down a very dangerous path and leads to some things Subway doesn’t approve of. The fact that Subway was cool with the way they were portrayed in this episode shows what a cool and progressive thinking company they are. Plus. If you’re going to have product placement, why not be obvious about it and make it funny.

Other storylines populated the episode include Jeff (Joel McHale) realizing Greendale has lockers – and discovers there’s a girl named Kim who hates him (she left a note in his locker two years ago about this). He now wants to apologize, but finds out she’s dead (or is she/he?).

Meanwhile, Troy (Donald Glover) and Abed (Danny Pudi) continue to drift apart, especially when they decide to create different forts – one made of blankets, the other made of pillows. Much of this is being manipulated by the super creepy Vice Dean Laybourne (John Goodman) who wants Troy to join his Air Conditioning Repair Annex. Lines are drawn by the end of the episode which should get a pay-off in the second part airing next week.

“Digital Exploration of Interior Design” is filled with tons of great pop culture references including an homage to the 1970s Gene Hackman thriller THE CONVERSATION. A solid episode which is a reminder of how addicting the show can actually be.

COMMUNITY is so loopy and silly, it’s exciting that more people are discovering the show and now, actually making the series the highest rated comedy on Thursday nights for NBC (holding its own against the CBS juggernaut THE BIG BANG THEORY).

If only the network put as much promotion into COMMUNITY as it has with series like SMASH or even PRIME SUSPECT, who knows how high the numbers for this series could soar.