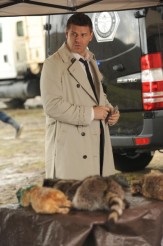 “The Don’t in the Do” is a decent if somewhat uneventful episode of BONES. The procedural element here concerns the corpse of a hairdresser found in a garbage heap where blue-painted seagulls have dropped out of the sky. It turns out the murder victim had been doused in anti-freeze and the scavengers that fed on him were poisoned by it. Meanwhile, it turns out that the body was also scalped.

There are two B stories here. One revolves around squintern Arastoo Vaziri (Pej Vehdat), who is a little over-excited about the prospect of having an article published in an academic journal. The other concerns Brennan (Emily Deschanel), who is uncomfortable with her post-partum body and the fact that her clothes no longer fit her properly.

The episode drops the ball a little on this last element. Brennan at first complains that a green top makes her “look like a golf course,” but later, when she’s supposedly back to her relaxed and rational self, tells Booth (David Boreanaz) that she is fine with the way she looks. Apparently, the whole issue deep down is that Brennan is worried that Booth finds her less attractive, but since there is zero indication of this in either Booth’s actions or even Brennan’s reactions, it feels like the script started to go in one direction, stopped and got a bit lost. Having Sweets (John Francis Daley) drag Booth to go lingerie-shopping for Brennan isn’t a bad notion, but the sequence is simply mildly amusing rather than genuinely funny.

Vehdat is a welcome returning guest star and Vaziri is a fun character – the interactions between Brennan and her intern are effectively humorous and at one point touching.

So far as the murder, “The Don’t in the Do” gets points for having a plentiful amount of forensic investigation, with everybody jumping in to figure out exactly what’s happened here (the hairdresser’s assistant did it to get promoted). It seems a little unlikely that ingesting antifreeze would turn a bird’s feathers bright blue pre-mortem, but that’s dramatic license. Unfortunately, it takes more than blue seagulls and even blue lingerie to elevate an episode above the merely pleasant.