Home » cabin in the woods blu-ray 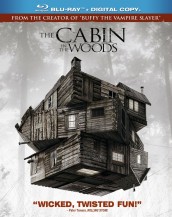 © 2012 Lionsgate Home Entertainment
THE CABIN IN THE WOODS
Columns

Also worth checking out: BAIT 3D, THE VICTIM, SUPERNATURAL: THE COMPLETE SEVENTH SEASON, SUBURGATORY: THE COMPLETE FIRST SEASON and more 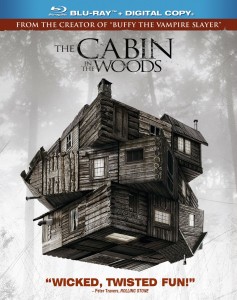 THE CABIN IN THE WOODS | © 2012 Lionsgate Home Entertainment

THE CABIN IN THE WOODS – You gotta hand it to Joss Whedon. The guy is pretty damn good. Whether he’s remaking television with FIREFLY and BUFFY THE VAMPIRE SLAYER or hitting the ginormous jackpot with THE AVENGERS, the guy doesn’t seem to do anything that sucks. He wrote THE CABIN IN THE WOODS along with director Drew Goddard (of LOST, ANGEL and ALIAS fame) and pretty much rewrites the twentysomethings stuck in a spooky cabin in one fell swoop.

Five people go to a cabin for a weekend and what they find there is nothing what they were expecting. Of course, the initial premise has been done a hundred times. But there is so much more here. A huge observation lab has been set up to watch and plan the demise of these twentysomethings in order to appease the old gods. The five choose their fate from a variety of odd objects in the basement and the killing begins. Later we learn that every conceivable means of death just happens to be lingering nearby and the reason for their deaths is actually a pretty good one. While numerous genres are blended together here, the second half of the movie is outstanding and with some great humor moments throughout. And with Whedon’s innate ability to write characters that seem to be real it all works. Definitely pick up the Blu-ray version as it is worth it as you also get a digital copy and some bonus extras. 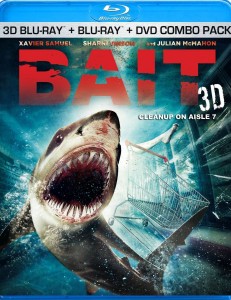 BAIT 3-D – This is a hell of a good time. Proof once again that while Hollywood is pumping out remake after remake in the horror genre (although it is getting a bit better), the international community is filling in on the original horror films without pulling any punches (check out PENUMBRA which recently came out if you doubt me or KIDNAPPED which came out last year). BAIT 3-D comes from Australia and it is one part environmental survival, one part killer beast flick. A freak tsunami hits the country and out of nowhere a huge supermarket is filled with water killing most of the patrons inside instantly. Those were the lucky ones as the wave brought with it two great white sharks that are looking for a bit of a snack. Like I said, BAIT doesn’t pull any punches and we have one epic shark mauling after another as the few survivors numbers dwindle. This isn’t a comedy, there is no happy ending, just a bunch of people battling great whites in the flooded isles of a grocery. Highly recommended. 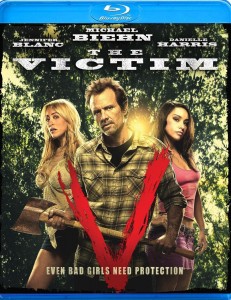 THE VICTIM – Michael Biehn is well known among the masses. Hell, he’s Hicks (from ALIENS). He always will be to me. But he’s also Kyle Reese (from THE TERMINATOR). And after great turns in THE DIVIDE and BEREAVEMENT, Biehn is again capturing the love of the masses as the go-to guy for horror and genre-related flicks. THE VICTIM is Biehn’s directorial and writing debut where he stars as a loner that gets involved in a bad cop killing gone wrong. While it won’t win any awards for acting or pacing, it is still an enjoyable thriller with lots of brutality. 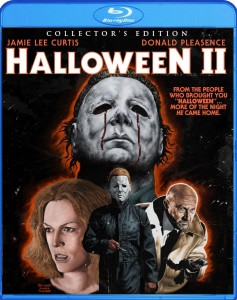 HALLOWEEN II – The much-loved sequel to the original film gets its long-awaited debut on Blu-ray. The film has been totally remastered using the latest technology and captures the film like it probably never has before. Michael Myers isn’t dead. In fact, he’s more pissed off than ever before and is once again in hot pursuit of his sister Laurie (Jamie Lee Curtis), who was taken to a hospital after surviving the first film. Unlike the original, with all of the tension and suspense, the sequel taking place mostly in the hospital leaves much of this behind instead just has Michael 86ing everyone from behind with a hot tub, a syringe, his hands and, of course, a butcher knife. But at the apex of the slasher genre this is a must have for fans that have wanted forever this classic in high definition. 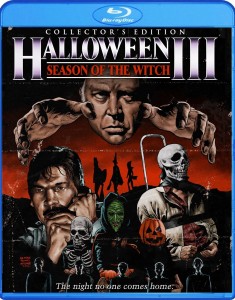 HALLOWEEN III: SEASON OF THE WITCH – I’ll just get this out of the way. I think this is a way underrated film. Yes, in the annuls of HALLOWEEN lore it has absolutely nothing to do with Michael Myers but that doesn’t mean it doesn’t work as a solid horror flick. Yes, the acting sucks. Yes, some of the plot makes no sense and leaves more to the imagination than it should. Yes, there is no Myers. But if you want something creepy and gets under your skin, this is it, especially if you have children. Of course, after the events of HALLOWEEN II and the apparent “death” of Myers, the producers wanted to continue the franchise so they took a different approach by offering up a tale of a major Halloween mask maker actually looking to kill every kid on Earth to appease some evil spirits residing in Stonehenge. Again, I don’t discount the plot is hokey. But still is a spooky movie and this is the first time it has been offered up on Blu-ray. 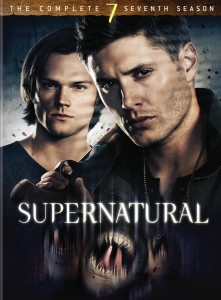 SUPERNATURAL: THE COMPLETE SEVENTH SEASON – There are not a lot of shows on network television I watch for my own enjoyment (instead of doing reviews for and having to watch). SUPERNATURAL is one of the shows I watch because I love it. No other show captures the comedy and snappy dialogue combined with crazy evil creatures such as this one does. Plus, we know the characters so well by now we know just how they will react to whatever circumstances. When Eric Kripke left the show, everyone feared the worse. But showrunner and writer/producer Sera Gamble did a great job continuing what Kripke started in presenting another take on the creature genre with the monstrous Leviathans, unstoppable monsters that were freed from Purgatory at the end of Season 6. Some major events happen in this season that dramatically change the Winchester Brothers (Jared Padalecki and Jensen Ackles) and forever alters this series. With Season 8 on the horizon hopefully it will continue to be as enjoyable as ever. There are two pretty good featurettes in the extras along with a handful of audio commentaries and the obligatory gag reel. 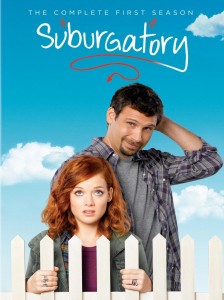 SUBURGATORY: THE COMPLETE FIRST SEASON – I live in the suburbs. It’s not that bad. However, I guess if you are used to living in the city and move there it can be quite the culture shock. That’s where this sitcom comes in, capturing the life of a quirky suburban neighborhood from the eyes of a city dweller now attending high school there. Single dad George (Jeremy Sisto) wants the best for his daughter, Tessa (Jane Levy), so he moves away from the urban lifestyle. For him, it is a new start. For her, it is her personal hell. What follows is the two adapting to the new lifestyle and those around them. All 23 episodes are collected here along with a minimal extras just in time for the new season to begin this fall. 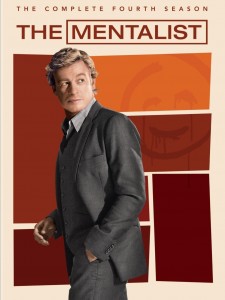 THE MENTALIST: THE COMPLETE FOURTH SEASON – I’m not the biggest fan of network crime dramas but at least over the past few years they have gotten more inventive than just one or two dudes tracking down some murder case. THE MENTALIST definitely falls into the uncommon category with Patrick Jane (Simon Baker) as a guy who uses keen skills of observation and his own brand of psychology to solve some pretty brutal cases. The fourth season continues the fallout over whether Red John is dead or not and having to deal with the consequences of the result. The five-disc set includes all 24 episodes from the fourth season and just in time as the new season begins in the fall so you can either catch up or see it again. Unfortunately, there is only one featurette on the set and it’s a standard look at the behind the scenes. 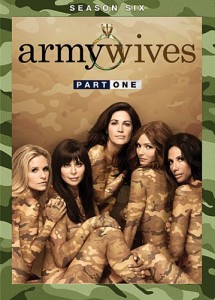 ARMY WIVES: SEASON SIX, PART 1 – The wives of the military often get overlooked in terms of what they also give in order for our troops to fight wars on other continents. ARMY WIVES gives us a bit of a look at what they go through, albeit in overly dramatic ways. Not a fan of the whole breaking a season of a show into two parts but at least they are offering to people who maybe missed the show (as it airs on Lifetime) or want to own it for posterity. The DVD set includes all 13-episodes from the sixth season with the other part schedule to be released later. 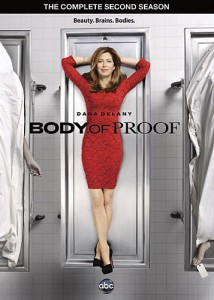 BODY OF PROOF: SEASON TWO – Medical and crime dramas are a dime a dozen on network television but at least they can look good while they are providing a look into the seedy world of investigating crimes. BODY OF PROOF has it in spades with Dana Delany (still looking good after all these years), Jeri Ryan, Mary Mouser and more. Delany stars as a medical examiner tasked with solving tough crimes and bringing those responsible to justice. Call it a mix between CSI and ER. Of course, it isn’t just about the crimes but about the people and we get plenty of at-home drama as well. With the show coming back for a third season, here’s your chance to check it out for the first time or relive what you saw in the previous season. Cool thing here is that there are eight featurettes on the show and more in the extras.

Article Source: Assignment X
Article: THE CABIN IN THE WOODS Highlights this week in Blu-ray and DVD Releases