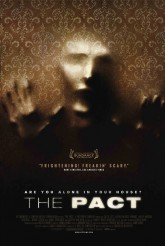 A scary little movie that picks up after a rough start

THE PACT turns out to be a scary low-budget horror movie that combines two different sorts of mythology, producing a few twists we haven’t seen before. It must be said that the film gets off to an uneven beginning. In the opening sequences, we can anticipate what the characters will say and what will happen, not because this is a meta-comment on what we’re watching, but because it’s simply predictable.

This makes it all the more gratifying when THE PACT starts to grow and twist. Our heroine Annie (Caity Lotz) initially has the good sense to stay far away from the modest San Pedro, Calif. house where she and her sister Nicole (Agnes Bruckner) grew up. Even their mother’s death won’t bring Annie back – but then Nicole vanishes. Annie comes to investigate and, in a refreshing change from many other, denser horror movie leads, sensibly scrambles out the door as soon as the house proves itself to be demonstrably weird. Soon enough, though, Annie finds something supernatural has followed her, forcing her to reconsider her options if she ever hopes to be free.

Writer/director Nicholas McCarthy has crafted a story that has satisfying added layers. There are a couple of places where we think we know where THE PACT is going, but it shifts around on us. This isn’t a reworking of INSIDIOUS or PARANORMAL ACTIVITY – THE PACT appears to be going in that direction for awhile, but turns out to have something different in mind (the ground has been covered in a couple of other genre films, but to name them would give the game away).

McCarthy is able to do a lot with shadows, dark spaces, doors, photos and even wallpaper so busy that it seems to betoken a bit of madness. He and actress Lotz also prove adroit at changing our views of Annie, who starts out seeming like one of those soap opera characters who are just too temperamental and unforgiving to be of use to anyone, and gradually comes to seem extremely sensible and resilient.

One of the unexpected assets of THE PACT is how McCarthy uses a relatively small space – the suburban dwelling where much of the film takes place in hardly the sprawling mansion or hotel of most hauntings, but rather a modest house of small proportions. Without interference, one could get through every room on the premises in under five minutes, but it feels just as creepy, deadly and far from the exit as its larger, pricier haunted cousins.

Kathleen Rose Perkins and Casper Von Dien turn up efficiently in the supporting cast, but it’s mainly Lodz’s film and she holds the screen with a becoming mixture of despair and determination..

THE PACT could have used a dialogue polish, but mostly it’s a bracing low-budget horror film that plays with expectations to deliver scares and satisfactions.