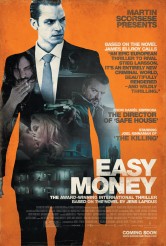 A complex Swedish crime thriller, with sympathy and culpability for all

Based on Jens Lapidus’ bestselling novel SNABBA CASH, EASY MONEY makes the point that some of the most horrible situations can come out of a bunch of people, each with different personal agendas, trying to do the right thing by their own lights.

EASY MONEY is set in and around Stockholm, Sweden, but its characters come from all over – languages include Swedish, Spanish and Serbian, though the word “okay” turns out to be universal. Jorge (Malias Padin Varela) is in the process of breaking out of jail when we meet him, enthusiastically returning to the drug scene, but stopping to unsuccessfully ask his disapproving sister if he can stay with her for awhile. Mrado (Dragomir Mrsic) is a hard man, working for the even harder Serbian crime lord Radovan (Dejan Cukic), who is thrown for a loop when he is forced to take custody of his adorable little daughter Lovisa (Lea Stojanov). Then there’s J.W. (Joel Kinnaman), a working-class college student eager to impress his moneyed classmates. J.W. is adept at appearing to fit in anywhere, so when it turns out that his boss at the cab company, Ahmed (Fares Fares), is willing to pay J.W. handsomely for assistance with Ahmed’s side business in the drug trade.

The screenplay, credited to Maria Karlsson, “in cooperation with” the film’s director Daniel Espinosa, plus Fredrik Wilstrom and Hassan Loo Sattarvandi, isn’t especially novel in its depiction of the mechanics of the drug trade. What distinguishes the writing here is that almost everyone (the ferociously racist Radovan aside) has human qualities. Seeing Mrado trying to bond with his little girl and wanting to do what’s best for her, we can’t help but feel for him.

The character who goes through the biggest transformation is J.W., whose intelligence and facility are qualities that actually get him into trouble. The more he succeeds at going through the doors he wants to open, the more uncomfortable he becomes. This is not only because J.W. doesn’t quite fit in and because, in the case of his cocaine-dealing associates, he’s in increasing danger, but because he’s not getting the satisfaction he imagined would come with the moves.

The actors are all excellent, with Kinnaman and Mrsic particularly impressive, and Cukic downright scary as the brutal, dismissive Radovan.

Where EASY MONEY falters a bit is in its pacing and tone. We understand director Espinosa’s laudable ambition to be both subjective and objective at the same time, getting us to sympathize with the characters while at the same time seeing that many of their actions have terrible consequences. Often the psychological insights are acute, but we are kept at something of a distance, observing rather than identifying with these people.

The filmmakers also want to surprise us with how people and events are connected. They succeed in some measure, but because we can’t tell where some threads are going, certain scenes seem to be wandering; by the time we understand how it all fits together, we’ve become a little detached.

EASY MONEY is a good and intelligent film, but it is sometimes simply intriguing rather than enveloping.