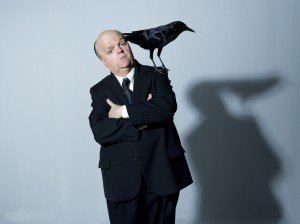 In THE GIRL, which re-airs on HBO this week, Toby Jones plays filmmaker Alfred Hitchcock. It’s not an especially flattering view of the director/producer, as it deals with his unwanted fascination with actress Tippi Hedren (played in THE GIRL by Sienna Miller), who starred in THE BIRDS and MARNIE for Hitchcock.

The London-born Jones is almost always working. A few recent credits include TINKER, TAILOR, SOLDIER, SPY, CAPTAIN AMERICA: THE FIRST AVENGER, MY WEEK WITH MARILYN, THE HUNGER GAMES and the voice of Dobby in HARRY POTTER AND THE DEATHLY HALLOWS, PT. 1.

Speaking briefly about THE GIRL, Jones says that the film displays some of Hitchcock’s behavior in a negative light.

TOBY JONES: But it’s my job as an actor to sympathize with the character and to try and find [what makes him sympathetic]. I think that he’s in control of everything in his life at that point – movie-making, every aspect of movie-making – he’s at the height of his fame after PSYCHO, and then there’s something he can’t control, which is this woman who’s exercising some control over him. And I’m not sure that he has the internal resources to cope with that. I think that’s something everyone can relate to, the idea of an emotion that has control over you, because control was such an important issue to him. You only need to look at his clothes, his uniform, the way he ordered his life, the way it became very systematic, the way he operated. Control was crucial to him.

AX: Have you ever felt like a director was abusing his or her power with you?

AX: You recently did MY WEEK WITH MARILYN, playing producer Arthur P. Jacobs, and of course the feature film HITCHCOCK is  Do you think there are more Hollywood biopics being made these days and, if so, why?

JONES: I don’t know about that. I think that’s not just about Hollywood, but I think maybe to do with biopics in general, there seems to have been a lot more of them being made. I think in a way, you generate a lot of publicity through the fame of the person being dramatized. It automatically garners a public from that, like a well-known book. That’s the best I can come up with. I mean, I think that’s how I’d answer that.

AX: You’ve been apparently working nonstop for awhile. Can you comment on that?

JONES: Ooh, I don’t know about that. I can’t – if I started theorizing about that, I’d say something I’d regret, because I’d either put a hex on it or else I’d see a pattern that isn’t there.