Home » Exclusive Interview: TOUCH Season 2 news from creator Tim Kring and what HEROES Season 5 would have been – Part 2 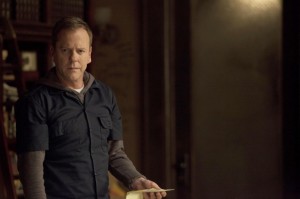 In the second part of our exclusive interview with TOUCH creator/executive producer Tim Kring, he talks about what we can expect in TOUCH Season 2 and what Season Five of HEROES would have been about.

ASSIGNMENT X: What can you say about your plans for Season Two of TOUCH?

TIM KRING: The season finale changes almost everything [from] the first season. We end in a place where the slate is wiped completely clean. Jake [David Mazouz] and Martin [Kiefer Sutherland] are now in a new life, in a new part of the world, with no ties to their former life, and we have introduced a serialized engine to the show. It started with the death of Danny Glover’s character, and has escalated, and by the season finale. So if you looked at it as a treadmill, we turn up the speed and we raise the incline.

KRING: We leave it that she certainly can come back, and it’s certainly open [for her] to come back, but [Martin and Jake’s lives are] now in a very different place with a very different set of circumstances. If you look at Season One as a whole, after seeing the season finale, you’ll realize that really the season is about what’s going to happen to Jake vis-à-vis this board and care facility that he’s in and who is interested. So we start the pilot with, “They’ve taken my son away from me” and we end the season with, “I take my son and run like hell.” That was Season One. And Gugu’s character as the social worker involved in that child custody issue wraps that story up and becomes an integral part of his escape, and so that character has come to an end. That’s not to say that she can’t fold back into the story, but that’s not where we’re heading..

KRING: That’s a different story, because he’s very tied to the mythology and the serialized nature of the show, and we would love to have him back, and if we can make that happen, I have the intention to make that happen.

AX: Did Danny Glover’s character Arthur Teller get killed off because you needed that character to die for the plot impact, or did he die and Bodhi Elfman’s Avram took over the plot function because Danny Glover had other projects he was doing as an actor?

KRING: It’s kind of all of those things, to be honest [laughs]. We knew from the very beginning that we had Danny for six episodes, so how do you maximize that? Plus, to be really honest, the sort of Yoda character that has answers – it’s hard to have that, because it makes a much easier route for your protagonist to find answers, if he can go knock on somebody’s door. So [Teller’s] purpose in the narrative was to ignite the mystery a little bit, and by having a guy who has answers die on you, it really cuts off the protagonist and, I think, cranks up the tension that his death was not completely explained and that there seems to have been some sort of mystery and perhaps foul play. It bodes for the danger that we eventually get to in the season finale.

AX: How has the collaboration on TOUCH been with your star and fellow executive producer Kiefer Sutherland?

KRING: Kiefer has been fantastic. He is a true partner. He’s enormously creative, is a filmmaker in his own right, and so that collaboration has been terrific. He obviously has a lot to say about things in terms of being helpful with casting, because he knows lots of people, and lots of people want to work with him, so it makes it a much easier phone call [laughs] – it’s a warmer meeting when I call somebody because of Kiefer, so it pays endless dividends.

AX: About the end of HEROES. – would something else have happened in the last episode if you were absolutely certain that was the end? Would you have done it differently?

KRING: No, because the truth is, we knew we wanted to end that season with that coming-out, basically, with Claire jumping eighty feet off of that [construction site], duplicating the first scene of the pilot. It was basically a duplication of her scene in the pilot, except now it was public for the world. We felt that if that had to be the ending, that was an interesting bookend. But what we were really looking forward to was the next season. We were going to start a year later and tell the story about what had happened in the previous year now that all of them were out of the closet, which was a very interesting idea and something that I think we could pick up and do whatever.

AX: At the time HEROES was canceled, NBC was in the midst of …

KRING: Big changes, and we were a part of those big changes.

KRING: Sure. To be off the air for, what was it, ten months. I don’t know how that can not hurt. But the show was on the air a lot, because we did twenty-three episodes the first year, we did twenty-five the third year. It’s a lot and I think a little less of it would have gone – you know.

AX: There was a rumor for awhile that NBC would do a HEROES wrap-up movie

AX: Back to TOUCH, if it’s a hit that goes for multiple seasons, are you going to have to do something with the timeframe for each season to explain why David Mazouz is getting bigger?

KRING: Well, those are questions that you unfortunately don’t ask yourself when you first get a pilot. Yeah, I think we’re obviously going to have to adapt to that. Every time I see him, I say, “Stop growing. You look like you grew a little bit – you better stop that.” [laughs] These fall under the category of high-class problems. In this day and age, to have a show that makes it to a second season is a huge vote of confidence and we’re taking it one day at a time. So we have not figured that out.

AX: The way TOUCH has worked this season, with all of the different stories – I mean, the audience knows how these things fit together, and Jake knows, but nobody else ever does.

AX: Will that aspect of the show continue now that it’s going to be more serialized?

KRING: Yes. This idea of these satellite stories that connect the world, that act as a kind of metaphor each week for the idea that we’re all connected, is something that is very much the heart and soul of the show. And you add to that this sort of underlying tension of, “I’m worried about what’s going to happen to these characters that I love and care for.” I think that’s the recipe for the second season.

AX: Do you have a favorite satellite story from Season One?

KRING: There were lots of them that worked really beautifully. I love the one that we did with the little boy in Russia, I loved the story that we did in South Africa. I tend to like the ones that I think we were able to pull off successfully, in terms of depicting another [part of the] world. I really think that the stuff we did in Baghdad, in Iraq, with this character Abdul, those two boys from Iraq – they were obviously the same characters from the pilot. I love those two characters. So there are so many that I loved. And then I love the continuing story of the two Japanese girls, our Harajuku girls, as we call them. And so I think a lot of what the second season will do is weave some of those satellite stories into the main narrative a bit more consistently.

AX: Do you feel that the TOUCH audience is responding to the series as you hoped they would?

KRING: Well, certainly anecdotally, from what people tell me, from what I read. The main goal of the show for me was, I felt very strongly about using archetypal narrative to create and promote positive change in the world. And in the small way that I feel that I can do that, it’s to tell stories that create this idea of inter-connectivity and global consciousness. And so I think people that love the show, I think love it because of that. There is a feeling that you have when you watch the show and you realize that your life, no matter how small it may seem, no matter how insignificant it may seem, has meaning, that your small actions may actually have great meaning in the world. That’s I think a very comforting thing for people to feel. And the chance to do that on a weekly basis and to have a show that’s not cynical, that actually can wear its heart a little bit on its sleeve is something that I find really enormously rewarding.

Article Source:Assignment X
Article: Exclusive Interview with TOUCH creator Tim Kring on Season 2 and what HEROES Season 5 would have been