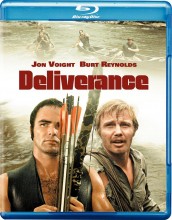 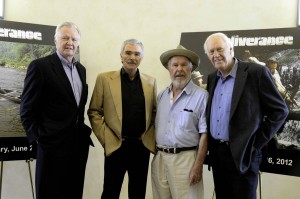 One of the most iconic and long-lasting action films is director John Boorman’s survivalist picture DELIVERANCE.

Starring Burt Reynolds, Ned Beatty, Ronny Cox and Jon Voight as city clicker buddies who decide to travel the Cahulawassee River, they soon encounter the locals that don’t take too kindly to strangers.

The film has so many memorable moments and Warner Bros. has just offered up a brand new 40th Anniversary Blu-ray special edition as well.

During a recent event on the Warner Bros. lot, ASSIGNMENT X was fortunate enough to spend some time with the cast to chat briefly about the making of the film and why it’s held up for so long.

ASSIGNMENT X: Is this the first time you’ve been back together to talk about DELIVERANCE in some time?

AX: Is it very easy to remember this film, because it’s become so iconic?

NED BEATTY: It is easy to remember.

RONNY COX: Seems like yesterday to me … it was my first film.

BEATTY: Burt had been in a few films.

REYNOLDS: A lot of them I had desperately tried to [forget]. This one, I will never forget. It is imprinted in my head. I have dreamt about it, thought about, wished I can do it again. 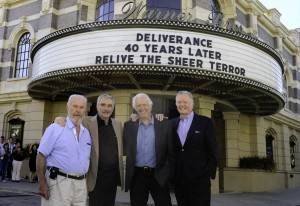 AX: One of the things that’s fascinating about this movie, I can’t imagine a studio greenlighting a film like this nowadays.

COX: John Boorman had canoed this whole river himself ahead of time. John has talked about his philosophy about doing these kind of action films. If a shot was so dangerous you need a stuntman for, you probably shouldn’t be doing the shot anyway. By him encouraging us to do the stunts, because he would do it himself, also leant that air of verisimilitude in the film that you don’t get anymore.

BEATTY: A lot of attention was paid before we started filming, of how it should be filmed, and the sense of speed. [With a] canoe, [once] it starts to go, it’s fast.

REYNOLDS: [Cinematographer] Vilmos Zsigmond was amazing – he was like a little monkey jumping around with the camera. We didn’t see him, but he was there. He just got everything. He was a stunning cameraman and has gone on to become as famous as he should have been.

COX: That shot of going under bridge.

VOIGHT: He was camera operator as well as cinematographer. Nothing was daunting for Vilmos. He escaped from Hungary from the communist. He was a man of adventure.

AX: The film feels very natural. How much was scripted and how much was improvised?

VOIGHT: My recollection was, we knew what we were doing from scene to scene, but we were alive within the process.

AX: Did you feel as a cast you were taking on the roles, particularly with Burt being the leader?

REYNOLDS: I really feel it was the first time it ever happened, I was Lewis. And I think we all in a certain way became those characters and certainly the relationships were that way.

COX: We rehearsed this for a couple of weeks and improvised every scene and got to know these characters pretty well.

BEATTY: Improvising was kind of special and we were in this groove. [At the] beginning of the 1970s, and [throughout] the ‘70s it became about improvisation. If got a script, you read it and tossed it away.

VOIGHT: The improvisation in the first parts sets up the movie.

BEATTY: Did you two ever feel you were too cute driving that jeep [to Burt and Jon]

REYNOLDS: Yes. I wanted to drive him crazy.