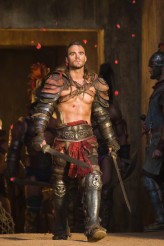 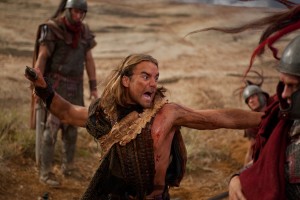 SPARTACUS VENGEANCE has finished cutting a bloody swath across Friday nights on Starz, and the body count left in its wake is a considerable chunk of the recurring cast. Dustin Clare who plays Gannicus luckily was not one of the casualties, and the actor has now done two series of the hit show, VENGEANCE and the prequel series GODS OF THE ARENA.

Pre-production has already started on the third season of the show, but ASSIGNMENT X got the chance to chat with Clare about returning to a whole new world in this second season of the on-going series. The actor speaks candidly with us about some of the changes on VENGEANCE not only for him but others, and where he wants Gannicus to go in the future of the show.

ASSIGNMENT X: Working on this new season, was there anything really different from what you did on GODS OF THE ARENA?

DUSTIN CLARE: It was a different type of show. You didn’t have the episodic structure set in the Ludus with the climax being the fight in the arena. The two class structures were different with the gladiators and the Romans. That changed. It was more of the big fights. It grew in size. Big Battles!

AX: Since there is so much post-production done to the series, do you as actors have to maintain the gladiator physique the entire time in between seasons?

CLARE: I think you have to take time off. I’m a pretty active person as it is, but you have to do upkeep because it’s too hard to get back in that shape otherwise. You definitely have some time off. It’s unrealistic to say that you would be able to keep up that regime all year. It’s hard enough for the seven or eight months while we’re shooting. [Laughs] 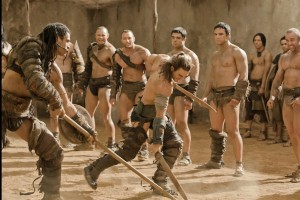 AX: Is there any kind of boot camp that you have on set to keep everyone as muscular as they can?

CLARE: We do have training sessions in the mornings before you get to set, or in the evenings you do the gym after everything is done. The work day doesn’t finish with the last shot for you; you still have at least another hour to go.

AX: Gannicus is named as one of the leaders of Spartacus’ armies, so I’m guessing there is going to be a lot more with him?

CLARE: Yeah, it’s general knowledge that Gannicus is a part of Spartacus’ armies in recorded history; so the character they’ve created is still very much a man who is a master of his own destiny. He’s not good at conforming to having to take orders from someone else. It’s not necessarily something that he’s going to be a devoted part of this season, but he is definitely in that world. He’s a free man, he could move between the two worlds when he started out this season. He’s still very much his own man at the end. He and Spartacus have very different ideals. Spartacus is a bit of a genuine hero and Gannicus is more of anti-hero. I wanted to try and keep him as his own man.

AX: With as many characters and storylines as were handled this season, did you have any kind of adjusting to do in the way this season worked for you?

CLARE: I think the series has always been quite a bit of an ensemble. In that sense, it’s a lot of storyline to get around. You are protective of your character as an actor. It’s a big ensemble cast and you find yourself on your storyline and your character’s journey. There wasn’t any really big transition for any of us between seasons. I think what they wanted to do was to have an audience experience Liam (McIntyre) as that character of Spartacus for some time before reintroducing characters like mine from the prequel. I think that was a great idea, letting the audience have that time. 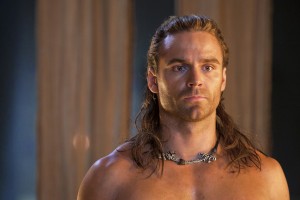 AX: Since there is a lot of green screen work in this series, is everyone shot at once, or are several things and scenes composited together to make a larger picture?

CLARE: If one of us crosses in the background that’s us shooting it all on the same day. It’s such a big ensemble cast and often you have be there for everything. Particularly in the prequel in the Ludus scenes you had days where you might just be standing there in a line, because your character is seen but not heard that day. You definitely don’t have breaks like on other shows that are focused on just four or five characters because the supporting and lead characters in this trade off depending on the scene. The supporting can become leading for a scene or the lead characters step back to support the supporting ones. In that sense you are all there for each other.

AX: What was one of your favorite things this season?

CLARE: Working with the double swords again! [Laughs] That’s always fun. I got some more rigs and doing a bit more of the aerial skilled stunts with all of the jumping around and through things. The fighting side is changing a little and in some ways it’s allowed the [rigging] department to be the stunt coordinating department as well. They recently got nominated for an Emmy Award. They were given some more license to play with new ideas this season. I think it makes it more engaging for an audience; that new style of fighting and choreographing so many more people. It was nice to bring my character back into the mix and to be controversial with his behaviors and way of thinking, and unsettling the characters that might have found a peace since the last time Gannicus saw them.

AX: Looking ahead to the future of the series, what would you really love to be able to do with Gannicus?

CLARE: I think I would like to have his ideals challenged more. I want him to have to question himself more and the choices he’s made. I’d like to see him reflect more on his emotional injuries so he can grow from them. There’s so much darkness in this character, which I think is really engaging and it would be nice to explore. The lightness is really the society he lives in that keeps holding back that darkness. He’s got potential for both sides and to explore them in greater detail would be great.