Exclusive Interview: ONCE UPON A TIME star Raphael Sbarge is the conscience of the hit ABC series 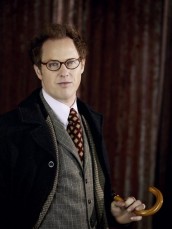