The actor talks about his character, plus some new ventures 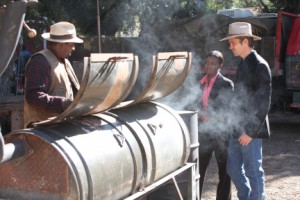 In FX’s JUSTIFIED, now in its third season Tuesday nights at 10 PM and already renewed for a fourth, a lot of the residents of Harlan County, Kentucky seem to act like laws unto themselves. This is often true of protagonist U.S. Marshal Raylan Givens, played by Timothy Olyphant, as well as a lot of his adversaries in the series, based on writer Elmore Leonard’s story “Fire in the Hole.”

It is always true of the character Ellstin Limehouse, played by Mykelti (pronounced Michael T) Williamson. Limehouse, just introduced this season, rules the secluded Noble’s Holler with unquestioned authority. Noble’s Holler has been around since the Civil War, an uncommon black community within Harlan’s mostly white (and sometimes racist) demographic. Limehouse, as we have learned earlier this season, functions as a banker for people like the late Mags Bennett (last season’s Emmy winner Margo Martindale), who’d rather keep earnings away from the eyes of both the law and fellow criminals.

Williamson, originally from St. Louis, Missouri, has been acting professionally since he was eighteen years old and working steadily ever since. He’s perhaps best known to moviegoers for his role as Bubba in FORREST GUMP. On television, he’s worked before with JUSTIFIED creator/show runner Graham Yost as a regular on the series BOOMTOWN and again on the pilot for the short-lived RAINES. He was also on the final season of 24, recurred on CSI: NY as a police chief and starred as Lt. Gerard in the 2000-2001 TV remake of THE FUGITIVE, among many other credits. Williamson sits down for a talk that’s mostly about Limehouse, but also covers other endeavors past and upcoming.

Here’s what he has to say about JUSTIFIED Season 3 and more.

ASSIGNMENT X: You seem to play a lot of law enforcement roles.

MYKELTI WILLIAMSON: Those are the juicy parts. People are drawn to power in characters, because you have fewer limitations. So I think that’s probably why I’ve been drawn to those kinds of characters.

WILLIAMSON: Right. Well, he enforces the law, but it’s his own law. In his world, it is. Ellstin Limehouse is primarily he’s a banker and a businessman. But he knows that he’s the leader of his own community, his holler, and he’ll do whatever it takes by any means necessary to maintain the quality of life that he has become accustomed to in his own holler. He’s not interested in allowing anything to infiltrate the lifestyle there, like marijuana, moonshine, anything. He just tries to keep the place cleaned up – he’s the sheriff in town, so to speak.

AX: He’s probably not too pleased about the deal that Mags Bennett made with the mining company last season.

WILLIAMSON: No, he’s not. Because there have been problems with the water, his people getting sick [from the pollution]. So he cut a deal with Mags, and he’s doing everything he can to live up to that deal, but it’s getting a little bit touchy now.

AX: What’s Limehouse’s attitude toward the Detroit gangster Quarles, played by Neil McDonough, who has come to Harlan with the idea of taking over?

WILLIAMSON: Mr. Quarles is an interesting character to Limehouse. My character Limehouse perceives Quarles as well-informed, but misinformed, because [Limehouse] knows [Quarles] is a big city slicker, but he’s out of his element. And Limehouse can actually outfox the city guy and he knows it.

AX: Since Limehouse is a Harlan County local, why haven’t we seen him in the first two seasons of JUSTIFIED?

WILLIAMSON: Well, when Mags was alive, before she up and took her own life, Limehouse was kind of her best-kept secret. That’s who had her money, was Ellstin Limehouse, this banker. And he was out of sight by design. But now that Mags has up and taken her own life, now the waters are murky. They’re stirring up the waters now. So now he’s got exposure that he didn’t even want. He didn’t want to be bothered.

AX: As far as the show itself, had you been a JUSTIFIED fan already when they called you about Limehouse?

WILLIAMSON: Absolutely. I love the show. I’ve talked about how for me, watching the show as a fan, it was casting perfection. And at the end of Season Two, when Mags’ character took her life with the [poisoned alcoholic beverage] “apple pie,” boy, I couldn’t figure out, “What are they going to do? It’s going to be great to see what they do.” And then I got a call some months later and I was like, “Me? They’re calling me?! Okay, cool. I’m on, I’m in.” [laughs] But I had no idea what I was going to do, I just knew that Graham called and said he would love me to join the cast. I was like, “Great!”

AX: Did you do any research in order to play Limehouse, either on people who live in Kentucky, or …?

WILLIAMSON: Yes. It’s ongoing. In fact, the writers – Graham especially – gave me a bunch of research material and a bunch of back story, which I read, and it helped me to understand the way people live there. But even though there’s a real man whose name was Limehouse that [the writers] called Limehouse, my character is not doing exactly the same thing that that Limehouse did. He’s actually quite a bit darker than that Limehouse.

WILLIAMSON: Absolutely. A character is defined by behavior. So you have to behave differently, so that people are immediately drawn into the world of who that person is. Ellstin Limehouse is a bit of a panther, and he’s extremely deceptive and likes to hide in the shadows if he can, if at all possible. And he’s also got a very thick backwoods drawl when he speaks. And it’s somewhat poetic. It’s like he’s playing music. It’s as musical as the other characters on the show, because they are all very musical, if you listen. They all have a vibe that’s like that of a musician. With Timothy and Walton [Goggins, who plays outlaw Boyd Crowder] and the whole cast, it’s just terrific, it’s like jamming with a whole different set of musicians. And I am a musician, so it’s like playing with some cats you’ve never met before, and you find out who they are by the way they play. And that’s what this is.

AX: What do you play in terms of instruments?

WILLIAMSON: I play a blues harp. When I can, I play with [FORREST GUMP costar] Gary Sinise’s band, the Lieutenant Dan Band, so we travel – we actually spent Thanksgiving in Afghanistan, playing for the troops. I play blues harp, I play a little upright bass, piano, percussion, that sort of thing.

AX: Do people still recognize you and come up to you about FORREST GUMP?

AX: You were also on 24 for most of its final season. That was another show where, like JUSTIFIED, you came onto it after it had been on for several seasons. Can you contrast the two experiences?

WILLIAMSON: I think I’m able to make a much greater contribution in this [JUSTIFIED] experience. 24 was so well-defined that there was a box that you went to fill into, and the dialogue was highly technical and it was hard work. I enjoyed the cast and the crew, I love Kiefer [Sutherland], and it was great to be with Kiefer, but the work was so hard. It was one of the hardest things I’ve ever had to do. [JUSTIFED] is not so techno-specific. This is more character-driven. It’s not driven by these technical plots that you have to explain to the audience why this piece of equipment is being called in and this and that. It’s more about the people trying to outfox other people and get away with things. That’s what this is about and I love it. It’s a lot more cerebral.

AX: Do you ever go to the JUSTIFIED writers and say, “How about if we said it this way” in terms of your dialogue?

WILLIAMSON: Absolutely. We all do. The interesting thing about FX is they have this slogan that says, “There is no box.” And I’ve seen that slogan before coming here, and I thought, “That’s  an interesting slogan.” But that actually defines who they are. Because when you’re working on an FX project like this one, there’s no box. They don’t box you in. You’re encouraged to be smart and nobody’s going to be offended and you’re surrounded by smart people. So it’s wonderful, it’s great. I’ve worked for a lot of networks, and sometimes you run into a wall and, for lack of a better term, it’s just too damn network-y. You’ve got to get approval from this person and approval from that person and they’ve got to get approval from that person and they’re out of town and all that stuff. [On FX Network], you just make it as good as it can and it’s encouraged. And I love that.

AX: Nick Searcy, who plays Chief Deputy Art Mullen, was saying that Timothy Olyphant in particular likes to change things around on the set while working the scene. Is that your experience as well?

WILLIAMSON: That’s exactly my experience with Timothy. He and I have had a great working relationship, because he’s about making it better. And he always does. And like I said, you’re encouraged to be smart. And if you see something that needs to be elevated, you elevate it. And everybody’s on board and it’s great. It’s really a good place to be. There literally is no box and I love it.

WILLIAMSON: I do. Actually, I’ve got a couple of directing assignments coming up. There’s a project I wrote called JOHNNY FROM JERSEY about a friend of mine who’s a personal bodyguard to Jimmy Hoffa Junior, or was, and he’s got great stories. Big Johnny Russo. I’ll be producing and directing JOHNNY FROM JERSEY, so it looks like we’ll get underway in the summer.

AX: Is this your first feature film as a director?

WILLIAMSON: Yes, it is.

AX: Are you following around the JUSTIFIED directors, picking up ideas?

WILLIAMSON: Well, I learn from everyone. I’ve actually been a member of the Directors Guild for nineteen years.

AX: So you’ve directed a lot of television?

WILLIAMSON: Yes. I’ve worked as a director for nineteen years. I just keep it under the radar and keep learning, because there are too many guys running around saying, “Hey, look at me! I’m directing! Hey, look I’m writing, I’m producing!” I’d much rather just get it done.

WILLIAMSON: I’ve got my own rub that’s going to be coming to the market. It’s called Mykelti Williamson’s Bubba Style Good Old Rub.

WILLIAMSON: It’s a dry rub [for barbecue]. It’s a seasoning.

AX: Is this your first foray into the food business?

WILLIAMSON: Yes, it is. It’s exciting. I’ve been making rub and barbecue sauce for years, and I’ve been encouraged to go ahead and put it on the market.

WILLIAMSON: I just want people to tune in and hang on and ride.