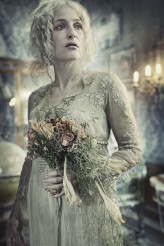 Charles Dickens’ novel GREAT EXPECTATIONS is considered one of the classics of Western literature. It has been adapted in many versions for stage, film and television. Now PBS is broadcasting its co-production with the BBC of a new miniseries adaptation of GREAT EXPECTATIONS in its Masterpiece Theatre Classic showcase, with one hour tonight at 9 PM and two hours next Sunday, also starting at 9 PM.

For those unfamiliar with the story, financially disadvantaged nineteenth-century youth Pip (Douglas Booth) is bankrolled by a mysterious benefactor. He falls in love with the beautiful Estella (Vanessa Kirby), whose guardian Miss Havisham was jilted at the altar years ago and has subsequently gone insane, with a particular dislike of all men.

Gillian Anderson takes on Miss Havisham in the new version. The Chicago- born actress has done her share of fact-based drama and period work – she won a British Independent Film Award for her starring turn as the unfortunate Lily Bart in THE HOUSE OF MIRTH – but she is still probably best known for her nine years on TV and in three spin-off feature films as skeptical Special Agent Dana Scully on THE X-FILES.

Anderson, now based in London, has come to Los Angeles to talk about GREAT EXPECATIONS, but she obliges with a few quotes about her alien-tracking days as well.

ASSIGNMENT X: You’ve done an awful lot of projects set in the nineteenth century – Lady Dedlock in the BLEAK HOUSE miniseries – another Dickens adaptation – Lily Bart in HOUSE OF MIRTH, Ahab’s wife in MOBY DICK and now this. Is there something about this period that appeals to you either aesthetically or as an actress, or have you just somehow coincidentally wound up in all of these?

GILLIAN ANDERSON: I think it’s somehow coincidentally. I mean, I think that it’s all a matter of timing, as much as anything, and if something fits in to my schedule with other things and it happens to work out and the script is particularly good, then I’ll consider it, no matter what the period is. So it just so happens that a lot of the period pieces that I’ve done are adaptations of really good novels and there’s always something – I don’t want to say “better,” but there’s always something particularly enjoyable about the depth of that material , especially for an actor. So that’s generally why I do choose to continue to do them. It’s challenging and rewarding in different ways than contemporary pieces.

AX: Some of the characters you’re best known for are pretty grounded people. Were you looking forward to playing somebody like Miss Havisham, who is perceived as being mad?

ANDERSON: There’s something very fun about playing her. I just recently did [the British miniseries] THE CRIMSON PETAL AND THE WHITE – I played an older, I think even slightly madder character in a way. So it wasn’t a brand-new experience, but it was definitely something that I looked forward to doing.

AX: Is there a difference in playing a character who’s not grounded in the same reality as everybody around her?

ANDERSON: Yeah. There’s a fun in that. It opens the door to a lot of playfulness and spontaneity and yes, it’s very enjoyable.

ANDERSON: That is the nature of the character – that is what she’s about, her deterioration, as much as anything, and there’s a very specific kind of mapped-out course for her deterioration between the makeup people and the wardrobe people and what I have in my own mind in terms of the psychological deterioration and I guess we just hope that it all works together.

ANDERSON: We rehearsed it very many times. It was my responsibility to show her [the stunt double] what I would be doing in that scene. I guess we had already shot a bit of that part, but [show her] what my actions were so that she could repeat them and the [the image] would be overlaid [in post-production]. And she came in wearing the dress, and had her arms and her head wrapped in white something, and she had a red tube coming out of her mouth that she could breathe through. And we rehearsed it a few times and then all the guys came in and rehearsed the intensity of somebody being on fire. So they rehearsed that. And then everybody went outside and sat. Nobody was allowed to be in the building [when they were doing the fire stunt] in case it went up in flames. So we sat outside in the tent and watched the action on the monitor. And when [the stunt woman] was first ignited, the flame went faster than they had anticipated and it was kind of freaky. She stayed that way with the flames, holding her breath. They took out the red tube and she went [Anderson gasps, demonstrating] and then they set her on fire [again] and she stayed that way for a very long count of fifteen, and then they put her out.

AX: But the stunt woman is all right?

AX: And what was the overall dynamic like working on GREAT EXPECTATIONS?

ANDERSON: The set on the whole was a very positive and encouraging platform for everybody to work and I think that we all felt that we were doing something together for a single purpose, doing our best. There’s a unity that takes place, and so we liked each other, we enjoyed each other in the process and enjoyed the process of working with each other on the set as much as chatting and whatever in the makeup trailer. To be able to have kind of an open forum to just create and to participate together in that creation is a lovely place to be.

AX: In period pieces, do you find you get more support from the sets and costumes and props than you do in contemporary stories?

ANDERSON: No, I think that no matter what the production is, it can have as much attention to detail. You know, when we did HOUSE OF MIRTH, the train that pulls into the station was actually made of cardboard. They didn’t have a budget to even pull up an old-fashioned steam engine. So you can do a lot with nothing, and I think that in my experience, there’s as much attention to detail and professionalism in contemporary pieces as in period dramas.

AX:  How was working on X-FILES compared to a project like GREAT EXPECTATIONS?

ANDERSON: [It was] much more complicated. I was working sixteen-hour days and I had a young child and was co-carrying a television series and couldn’t leave the house without the paparazzi and all that kind of stuff. And now that’s not my experience. I learned how to act on the show. And I kind of grew up on the show and I learned about discipline and about human relationships and how to negotiate lots of different situations and how to deal with huge amounts of stress. The way that I do remember it is with fondness and appreciation for the opportunity. When [X-FILES creator/executive producer] Chris [Carter] and [costar] David [Duchovny] and I are in the same room together, we reminisce and I get a little melancholy about it, but when I think of it on a daily basis, not that I think of it on a daily basis, I don’t think about it with longing.

AX: Is there anything else you’d like to say about GREAT EXPECTATIONS at present?

ANDERSON: I think it’s really good and everybody should watch it.