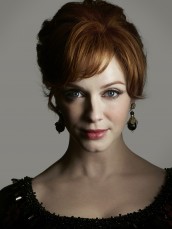 The actress talks her favorite Joan scenes and more 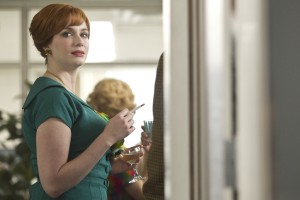 MAD MEN has its fifth-season finale tonight on AMC. Created by Matt Weiner, the series about the careers and personal lives of Madison Avenue advertising executives has won Emmys and viewer loyalty

One of the other things MAD MEN has done is made a sex symbol and fashion icon of Christina Hendricks, who plays Joan Holloway Harris. Over the seasons, Joan has risen from being a secretary to, this season, a partner in the firm. Hendricks, born in Tennessee and raised in Idaho, acquired a cult following for her role as the many-named con woman Saffron on FIREFLY and was a series regular on BEGGARS AND CHOOSERS and KEVIN HILL. She also had a supporting role in last year’s acclaimed feature film DRIVE.

At a party thrown by AMC for the MAD MEN company at the Television Critics Association press tour, Hendricks takes a few minutes for some spoiler-free talk about Joan.

ASSIGNMENT X: Everybody on MAD MEN is going through a lot of changes, and the women – the mad women maybe even more than the mad men. Do you have a favorite phase of Joan’s character?

CHRISTINA HENDRICKS: It’s hard to [choose] a favorite phase. There are so many – she’s changed a lot over the seasons, Joan, and sometimes I miss her sassy character comments from Season One. I think that was a fun thing to play. And then I loved seeing her with Roger [initially Joan’s boss, played by John Slattery], how sort of girlish she becomes, and I liked her running around the office and ruling the roost. I like all sides of Joan. There are lots of things I like about her.

AX: So you’re never worried that the script might flatten her out?

AX: Not flat-line, but some of the MAD MEN characters get quite depressed and their demeanor kind of becomes flat …

HENDRICKS: Right. I think one of the characteristics of Joan is that she’s quite spirited, and she always picks herself up and brushes herself off and keeps going. I think that’s why people root for her. I can’t imagine that changing.

AX: There’s a several-year leap in time between Seasons Two and Three. Did you feeI you were playing Joan any differently when the show came back after the time jump?

HENDRICKS: No. I mean, the thing about having an opportunity to play a character for five years now is that each time you come back, each season you come back, you’re informed with so much more about her than the previous season. So every time you make a decision about a scene or how you’re reacting with a character, you have all of this information streaming behind you, from Season One to Season Three, it just gets richer and more and more, and I have more information. So that would be the only difference, that I just have more to work with.

AX: MAD MEN was off the air for seventeen months between Seasons Four and Five. Was it a relief when you came back?

HENDRICKS: I don’t know if I would call it – I guess it was a relief. I was just anxious to get back to work. I didn’t have any concerns about not coming back or anything like that. I just knew that they had to [deal with the show’s overall contractual matters] and it was going to take awhile, so I was happy to be back.

AX: Have you enjoyed or were you sort of startled by the intensity of the whole media wave of, “Christina Hendricks, sex symbol”?

HENDRICKS: [laughs] Totally. It’s an incredible compliment, an extraordinary compliment. People have been very, very, very nice. It also makes you sort of self-conscious and makes you think about [appearance] more than you normally would as far as going to events, choosing the right dress or whatever it is, but certainly it’s been more complimentary than anything.

AX: Do you have a favorite scene or episode in what you’ve done so far on MAD MEN? Not asking for spoilers about anything we haven’t seen yet.

HENDRICKS: Yeah. I always go back to Season One. I think it stands out the most in my mind, maybe because it was all so fresh and exciting and new, but I really loved the episode of “Babylon” in Season One. Joan got to do some really fun things, there were some wonderful Joan and Roger scenes and there was that great scene about the girls trying to look in on the guys through the two-way glass – I just absolutely loved that episode. And then Jon [Hamm as Don Draper] and Midge [played by Rosemarie DeWitt] go to the club, and there’s a poetry reading. I just thought it was really beautiful.

AX: Do FIREFLY fans still recognize you and come up and say, “Saffron”?

HENDRICKS: Every once in awhile, yeah. Or it’s “Mrs. Reynolds” [laughs].

HENDRICKS: I’m [going] to London to shoot a film [currently listed on IMDB as UNTITLED SALLY POTTER PROJECT] there with Sally Potter directing, and it stars Elle Fanning and Alessandro Nivola and Annette Bening. I’m very excited about it.

AX: Anything else you’d like to say about MAD MEN at this time?

HENDRICKS: I just think this season is going to be amazing. So much happens with these characters this year, it feels like our best yet.