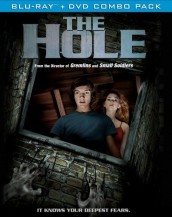 A decent scary film for older kids and young teens

THE HOLE may serve as a good test disc for the young would-be horror fan in your family. Approximately as scary as GREMLINS, one of THE HOLE director Joe Dante’s better-known credits, this movie doesn’t have flying gore or a body count, but it’s reasonably serious and creepy, and does have a few shots of a ghost with the back of his skull missing, along with lots of child-in-jeopardy moments. If you know a young person who wants to watch something frightening but you’re not sure what his or her tolerance is, this is a movie you can watch together. You’ll get a nice little frisson of fear and you maybe able to discern whether your offspring/relative/friend’s kid is ready for anything stronger.

In THE HOLE, single mom Susan (Teri Polo) has just moved to a small town with her two sons, teenager Dane (Chris Massoglia) and young Lucas (Nathan Gamble). The family moves around a lot, for reasons that become clear later in the film. Exploring their new house, Dane and Lucas find a hole in the basement that seems absolutely bottomless. The boys befriend pretty next-door neighbor Julie (Haley Bennett) and soon all three of them start to have some unnerving supernatural experiences. Meeting the house’s previous resident, Creepy Carl (Bruce Dern), provides some answers, but the perils are still there.

Director Dante and writer Mark L. Smith tread the fine line between creating a situation that is mysterious and alarming, yet – here’s the YA part – ultimately allows our protagonists to stand up for themselves and each other.

There are some pretty cool concepts here, including Creepy Carl’s surprising refuge, a malevolent court jester doll and the scale of the environment in which the final confrontation takes place. There’s also a bit of cool stuff with a video camera that is sent down the hole for information, though after one tantalizing glimpse, this is abandoned in favor of other matters.

Smith’s script shrewdly weaves in some real-life horrors to bolster the sense of dread felt by the young characters, and Dante as a director knows not only how to stage jump scares, but also how to make moments of human connection without overdoing them. For fans of Dante and his good luck charm actor, Dick Miller shows up briefly but clearly.

Gamble is particularly likable as Lucas and Bennett is charming. Massoglia does very well when Dane’s fear starts peeking out behind his cool façade. Polo is very good as a woman under extraordinary pressure, trying to do right by her family.

The home video release comes with a nice set of extras, including a making-of featurette, featurettes on the mythology of the Hole (“The Keyholder”) and on the family (“Family Matters”), plus a photo gallery.

For a youngster, THE HOLE will be a true, well-constructed horror movie. For a grown-up, it’s an agreeable afternoon flick, with decent frights, good production values and mythology that’s reasonable on its own terms.