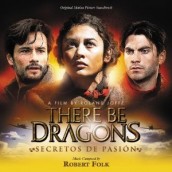 It’s no easy task scoring a movie as singularly over the top, in that romantic 1930’s kind of way as Roland Joffe’s THERE BE DRAGONS, a film whose overly passionate intentions managed to turn the Spanish Civil War into a soap opera. Even an accomplished musician can slip from the dramatic into the maudlin when given this kind of florid scope to accompany, as could be heard in the over-emphatic score by the film’s original composer Stephen Warbeck during DRAGON‘s brief theatrical run last year.

Thankfully, the producers’ commitment to salvage one aspect of the film afterward turns out to be a golden opportunity for Robert Folk to really strut his stuff. For while he might have such notably eclectic credits as ACE VENTURA 2, ARABIAN KNIGHT and POLICE ACADEMY, none have revealed his Korngoldian ability like the gigantic canvas of  THERE BE DRAGONS.

Given a veritable orchestral cannon to blast this score out with, Folk nonetheless gets the film’s old-fashioned storytelling without overdoing it in the wrong way. He connects with the glossy symphonic swagger of Hollywood orchestras at the time of the Spanish Civil War’s height, pouring on lavish, memorable themes that hear history in a black and white way, with ripping guitars, military danger, Latin rhythms and a chorus of hundreds conveying the kind of star-crossed fate and sacrifice that demand a star filter.

Folk’s DRAGONS roar with a new symphonic excitement for the composer, a fiery sense of heightened drama that would’ve made the movie play way better if it was there the first time out. Hopefully, soundtrack fans, and this town in general will hear the second, powerful life that Robert Folk has granted DRAGONS with one of his best scores.

Related Link: Click on link to buy THERE BE DRAGONS soundtrack