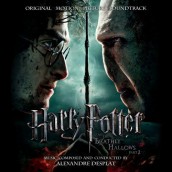 MY WEEK WITH MARILYN leads the Top Ten 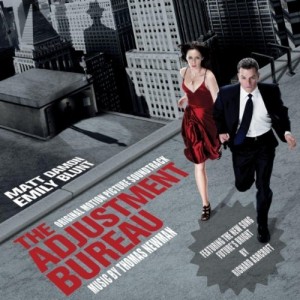 THE ADJUSTMENT BUREAU
(Thomas Newman / Relativity)
There’s always been something ethereal, if not downright unearthly about the dreamy, often rhythmic sound that’s allowed Thomas Newman to become the first alt. rocker to make it big as a film composer. It’s a sound that’s particularly well-suited to the spiritual, conveying a universe behind the walls of reality in such scores as THE RAPTURE, OSCAR AND LUCINDA and PHENOMENON. Now Newman’s on the side of the angels with hats for this moving, faith-based Phillip K. Dick adaptation. His mesmerizing mix employs strings and acoustic guitar, suspenseful beats, experimental dance pieces and ephemeral atmospheres, all of which seem to have been culled from some other musical reality. All produce an affecting, romantic resonance, conveying the tender refusal of the human heart to be manipulated by unimaginably powerful forces. It’s an intelligent approach that allows THE ADJUSTMENT BUREAU to touch a higher power with the most delicate, and hypnotic of melodic touches. 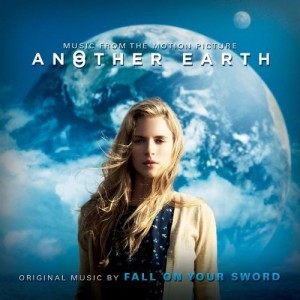 ANOTHER EARTH
(Fall on Your Sword / Milan)
While this ersatz sci-fi film may have been too precious with an indie-ness that reached for the stars, it’s that same, ambitious lo-fi quality which has yielded an infinitely more successful score from the Brooklyn-based duo of Will Bates and former LCD Sound System guitarist Phil Mossman. With a chamber and piano vibe akin to The Kronos Quartet (as channeled through Clint Mansell’s rhythmic score to MOON and the pulsating energy of Daft Punk’s TRON LEGACY, Fall on Your Sword emerges with a truly haunting voice, one that speaks for two lonely souls on the fringes of a counter-Earth discovery the whole planet can see. It’s a mix of instrumentally isolated humanity and cosmically weird musical science that comes off like emo grunge from Alpha Centauri for one of the year’s most unusual, and distinctive scores that hears the outer limits of the organic and the electronic. 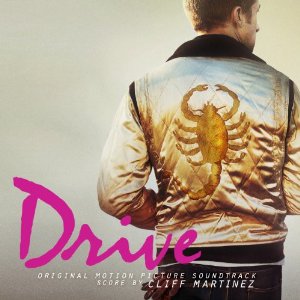 DRIVE
(Cliff Martinez / Lakeshore)
A master of avant-garde noir scores like THE LIMEY, TRAFFIC and NARC Cliff Martinez’s criminal tone poems often don’t talk above a hush. His hypnotic sound of silence is taken to a new level of impactful understatement for DRIVE’s barely verbal hero, whose whispered, minimalistic samples speak far louder than big orchestral notes could. Propelled by the glass sustains of the Cristal Baschet instrument that made Martinez’s SOLARIS into a cult score, DRIVE motors on existential exhaust and steely rhythm. It’s a hollow-sounding, haunted vibe for a getaway man with more buttoned-up emotion than meets the ear. With its intensity rising from a slow, surreal burn to a gnarled wall of grimly ticking burn, DRIVE‘s haunting score plays like Tangerine Dream’s THIEF. But here that iconic sound of crime cool is taken to the musical chop shop- its rhythm mostly gutted until the sad, dream-like dread of a life of inescapable crime is all that remains under the entrancing musical hood. 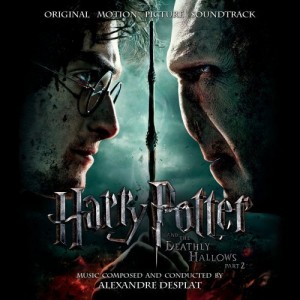 HARRY POTTER AND THE DEATHLY HALLOWS: PART 2
(Alexandre Desplat / Watertower)
Given the dreariness that afflicted the last two Potters, you wouldn’t have expected the saga to end with such an emotionally rousing bang. And if Alexandre Desplat’s score for the first HALLOWS got a bit bogged down by that film’s deathly depression, here the composer uses one big, Rowlins-worthy spell to create the musical equivalent of the movie’s satisfying sucker punch, one that’s arguably made HARRY‘s saga go out with more satisfaction than any genre franchise before it. The previously gloomy musical fog solidifies into an epic of vulnerability and desperation, as Desplat becomes one with Hogwarts’ last stand. Heroically exciting and emotional without indulging in any of of the kind of rah-rah, cliffhanging moments you’d expect from good triumphing over ultimate, no-nosed evil, Desplat’s score makes us care, and root for this band of magical brothers. At the end, it’s a fragile, lovely feeling of survival that the second HALLOWS socks out, at once paying homage to the John Williams’ music that started it all, while maturing that lush, symphonic style to fit the wizened, battered glass frames of a boy wizard who’s done a hell of a lot of growing up through eight movies. It’s maturation that Desplat’s music makes us feel with a power forged as much from real-life emotion as the effects spectacle around it. 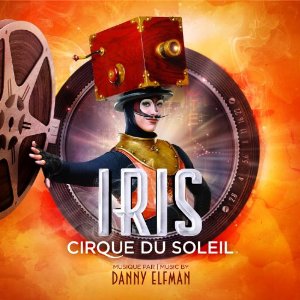 IRIS
(Danny Elfman / Cirque Du Soleil)
Who’d have thought that Danny Elfman would do one of his most inspired movie scores for a movie that didn’t really exist- let alone several at the same time? It’s this inventive, stylistic bounty that’s made me give a deserved mulligan to the Elfman soundtracks that you can only see live on stage at the Kodak Theater in Hollywood- home to Cirque Du Soleil’s movies-as-a-circus show “Iris.” With the music sending Cirque’s death-defying performers over audiences’ heads, trampolining off buildings, and contorting themselves into pretzels, Elfman’s work gives new meaning to being “in synch” with these moving human pictures. Ranging from furiously percussive symphonies to music box bells, solo pianos, syncopated voices and swing jazz, IRIS not only traverses the amazing history of Elfman music with sections reminiscent of EDWARD SCISSORHANDS, NIGHTBREED and DICK TRACY, but that of Hollywood scoring itself, with Elfman doing his own spins of “WEST SIDE STORY‘s finger-snapping jazz to the raging dance ritual of KING KONG. At once tightly controlled and spur-of-the-second, IRIS brings out a new sense of invention and freedom from a composer who’s already one of Hollywood’s most inventive performers. IRIS is a musical high wire act that Elfman pulls off with tremendous energy, and one definitely worth seeing in person beyond the album. 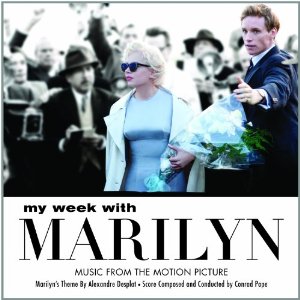 MY WEEK WITH MARILYN
(Conrad Pope / Sony Masterworks)
After adding to the sound of any number of great scores for the likes of Danny Elfman, Jerry Goldsmith and John Williams, ace orchestrator Conrad Pope finally gets his big moment on stage, musically embodying no less than the most famous sex bomb to ever sashay across the big screen. Abetted by a theme from Alexandre Desplat (for whom Pope orchestrated two HALLOWS for), Pope goes beyond the beautiful blonde iconography to discover the little girl lost inside of the star. It’s a lovely WEEK indeed as Pope discovers Marilyn Monroe’s true musical soul, while also capturing the pure delight it is for a newbie to be part of the wonderful world of filmmaking. As he plays the magic, and vulnerability of a Hollywood golden age with his own voice, Pope also recalls any of the melodic greats he’s collaborated with, while also reaching back to the kind of classic love themes practiced by the lyrical likes of Francis Lai and John Barry. For any one in adoration of the movies, let alone one of its most famous figures, your listening time couldn’t be more memorably spent than with Conrad Pope. 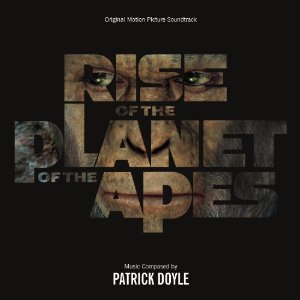 RISE OF THE PLANET OF THE APES
(Patrick Doyle / Varese Sarabande)
Patrick Doyle’s got some pretty heavy simian scoring steps to follow to make his own display of dominance for an APES film, especially when you consider the paw prints include those of Jerry Goldsmith, Leonard Rosenman and Danny Elfman. But it certainly helps that “Rise” is arguably the next best film in PLANET OF THE APES  franchise next to the other prequel CONQUEST (the unedited version that is). While Doyle certainly performs some percussive monkey tricks here, what makes his APES entry so impressive is how he emotionally makes its hero Caesar more of a Homo Sapien than any of us. It’s a depth of melodic feeling that turns this PLANET into perhaps the most musically human soundtrack of the series, music that makes us want to cheer for our own species’ demise. When it comes to that long-awaited revolt, Doyle employs a mix of electronic action percussion with a primal orchestra. It’s a similar approach to his other winning summer score for THOR, showing how this once classically symphonic composer has successfully evolved to be as good as any other action-scoring alpha ape out there. Given the justified acclaim that’s greeted this unexpectedly terrific movie, Doyle’s younger peers might just be cowering below this elfish, grey-haired Englishman when he beats his chest. 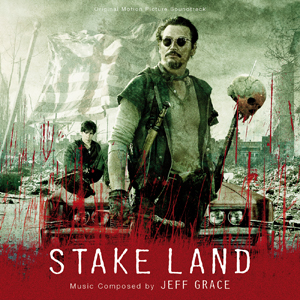 STAKE LAND
(Jeff Grace / Movie Score Media Screamworks)
It’s the vampire end of the world as we know it. But forget any condescending horror music clichés, especially from composer Jeff Grace. Having written the viscerally unique scores to such films as THE ROOST, HOUSE OF THE DEVIL and the forthcoming INNKEEPERS, Grace’s most effective decision is not to play The End like some bloodsucking apocalypse, full of the usual strident orchestrations and big “Boo” moments. What Grace, and this excellent movie deliver are far more somber and smart than that. If anything, STAKE LAND plays like a road trip through the dying remains of the Confederacy, with violins, a solo piano and Orff-like bell percussion capturing a rustic, and desolate sense of wonder at what civilization’s become, a place where man’s savagery is worse than any monster. Far more poetic than depressing, STAKE LAND strikingly lovely melodies ultimately are about the hope that comes with sacrifice, while still paying off the more sanguine musical moments when needed. A truly great “horror” score in name only, STAKE LAND shows the emotional possibilities that lie within genre scoring. 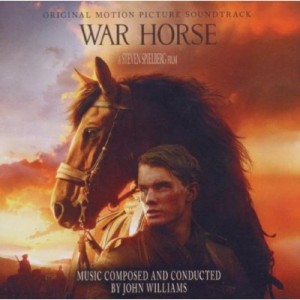 WAR HORSE
(John Williams / Sony Masterworks)
For another masterpiece in what’s likely to be remembered by the vox populi as the greatest composer / director teaming in Hollywood history, John Williams takes on the role of Mr. Ed for Steven Spielberg- that is, giving human voice to an animal most likely unaware that he was the star of a major studio production. It’s a lovely, deeply affecting musical vocabulary that confirms the species as some of the most noble, and lovely of God’s creatures. Starting with a lush, Irish-inflected approach that marks Williams’ welcome return to the land after FAR AND AWAY, the journey of WAR HORSE progresses to the darker, anguished territory of SAVING PRIVATE RYAN, with Williams capturing compassion, tragedy and the folly of battle on a grand, tear-moving scale that bonds horse and human alike as a victim. Indeed, the horse’s heroically militaristic flight across the trenches of World War I stands as one of the most stirring, heart-rending pieces in Williams’ career. Full of stirring goodness and the sunset-drenched themes that are completely inseparable from Spielberg’s imagery, WAR HORSE stands up majestically for music, movie and animal lovers alike. 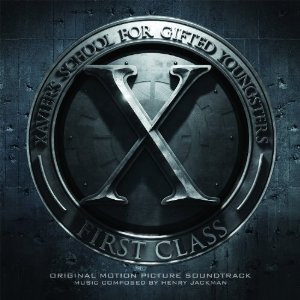 X-MEN: FIRST CLASS
(Henry Jackman / Sony Masterworks)
After getting his superhero feet wet on the non-powered avengers of KICK-ASS with the help of John Murphy, Henry Jackman now goes it solo for the beginnings of Professor X’s merry band of mutants. The fact that this origin story is set during the Bondian swinging 60’s adds a terrific retro spy vibe to a score that’s more than contemporarily rocking with its fine mesh of electronic and orchestral abilities. Jackman’s themes leap out with big melodic brushstrokes that would befit a Jack Kirby splash page, from a truly pissed guitar theme for Magneto to the kind of cape-flowing, symphonic hosannahs that tell you the good guys have just jetted in to save the world. It’s Jackman’s full-throttle commitment of playing comic book heroism as the stuff of glorious legend that makes the composer pass this CLASS with flying colors.