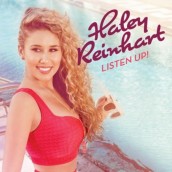 As AMERICAN IDOL has de-volved into an on-going parade of white guy with guitar winners and even blander Top 10 finalists, Season 10 did prove to have a diamond in the rough.

Her name was Haley Reinhart. She wasn’t country. She wasn’t a Whitney clone. She was an original with a jazzy sound, a great look and unfortunately too much criticism heaved on by the biased judges that made sure she didn’t get past the third position in the competition even though she deserved to be in the final two (and honestly, she should have won the thing too).

That’s what getting a record contract can do though – it can prove how wrong everyone was. Yes, Season 10 Top 2 Scotty McCreery and Lauren Alaina are doing just fine, it’s just that Reinhart has crafted one of the smartest and single-handedly original post-AMERICAN IDOL albums yet.

First off, the album isn’t a hodge-podge of A-list songwriters trying to impose THEIR style on Reinhart. With a year in the making, Reinhart has imposed HER style on the recording and it shows. She had a hand in penning eight of the 10 songs and there are numerous winners here.

The production value has a retro-vibe hoping to channel some of that Adele/Amy Winehouse mojo, yet Reinhart still feels modern and current without sacrificing her identity.

The kick-off single is the addictive “Free” which is a fantastic first single. It has so many different layers to it as it builds and wells and Reinhart hooks into the song’s vibe with conviction. This song definitely makes it into the Top 10 songs of 2012.

I think the other great ting about Reinhart is that her voice is identifiably Reinhart’s. So many IDOL contestants sound the same or disappear into a soundalike kind of vibe (case in point this year’s runner-up Jessica Sanchez) that it’s hard to know who they are. And with females getting short shrift the last several years, it’s great to finally find someone break out of the pack not pretending to be someone else.

Other stand-out songs include “Hit The Ground Runnin’”, “Wasted Tears” and “Keep Coming Back.”

If only producers were as careful with other contestants as they were with Reinhart, we would have far more success stories than failures. IDOL is an important show, whether true music critics want to cop to it or not. It showcases voices, not studio vocal trickery and it does find some incredible artists even if they fail to make to the end.

I’m sure Reinhart would have found her way into a major label studio with or without IDOL, but it definitely gave her the muscle to get some great songs, excellent production value and the opportunity to prove why she should have won AMERICAN IDOL – Season 10.

LISTEN UP! Is an appropriate title and worth checking out, particularly “Free” which is as perfect a summer break-up song that you’re going to get.

Leave a Reply to zey