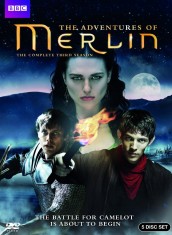 Possible reboot as well for the series for the films

One of the big news items to come out of Comic-Con 2012, is the BBC and Syfy series MERLIN is getting ready to develop a trilogy of theatrical films based on the TV series which is heading into its fifth season.

Though co-creator and executive producer Johnny Capps isn’t sure which form they will take, he talk a little bit about the plan.

“We’re in discussions with BBC about Season 6, but we’re talking about the movies,” says Capps. “We’re hopefully going to do a trilogy – three movies. We will focus on them when we finish Season 5.”

The MERLIN movies could potentially re-tell the MERLIN story by focusing on storylines not included in the first five (or six) seasons.

“One idea we’ve been playing around with is to reboot the whole series [for the films],” says Capps. “We would go back in time and start the story again and show different parts that you didn’t see in the series. The other idea is to do a continuation, but we haven’t decided yet.”