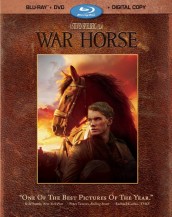 Also worth checking out: WE BOUGHT A ZOO, TORCHWOOD: MIRACLE DAY and more 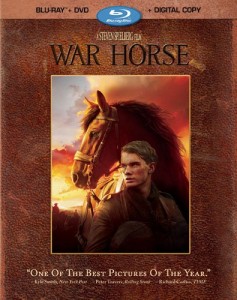 WAR HORSE – Steven Spielberg famous for his great takes on World War II takes a step back even further in history with a story from World War I. Now, the idea of a horse on a battlefield just screams glue factory but there is so much more to WAR HORSE. It is a saga of this horse that goes from a loving family into the throes of horror in the trenches, to numerous different owners and then back again into war in no man’s land between two warring forces. The film is just damn pretty with graceful scenes of this beast running between explosions and strolling across the countryside. It pulls at the emotional heart strings of those that love animals and how one particular animal can inspire hope among those that have none in a horrendous circumstance. I recommend getting the four-disc edition of the film that includes the Blu-ray version, the DVD, a digital copy and a disc chock full of extras. 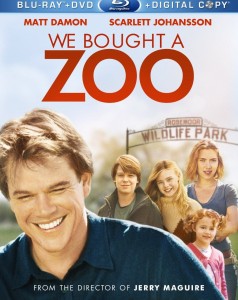 WE BOUGHT A ZOO – It is nice to see that Matt Damon is stepping outside the boundaries of the action flick and into this more emotional family movie that’s based on a true story. Damon stars as a widower and father that decides in order to deal with their grief of losing their mother, buys a run-down zoo and with the help of the zookeeper – luckily for him played by Scarlett Johansson – brings it back to life and along the way the family heals. Although it is a bit predictable and sappy, it still has some really good moments with humor coming from the animals and a heartwarming story about how different people cope with remorse and pain. 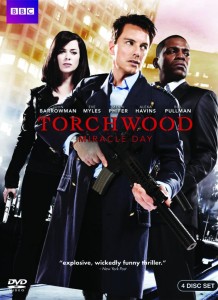 TORCHWOOD: MIRACLE DAY – I was super excited that Starz picked up TORCHWOOD from the dead since it was such a unique series on television. While the brother of the BBC’s DOCTOR WHO, it has always fashioned itself to be far more dark and edgy than WHO has ever tried to be. Plus, they never shied away from offing their characters to reinforce that dark and dangerous feel. The best of this was shown in CHILDREN OF EARTH, the mini series that had an alien force threatening to destroy the Earth if we didn’t send 10 percent of the world’s children to them – to be used as drugs for these aliens. It was outrageously hideous but great science fiction television. In fact, CHILDREN OF EARTH was so devastating to the whole essence of TORCHWOOD many fans didn’t know how the series could move on or go on.

MIRACLE DAY, while good in its own respect, can’t measure up to the previous miniseries but it does make it different enough that it keeps things interesting. TORCHWOOD moves to America where one day, no one in the world dies – no matter how badly the injury, illness, or accident. From that point on, the world has a new meaning and definition for what life actually is and impacts every aspect of our lives as the planet goes into frenzy. Of course, there is more than something mystical or spiritual involved and that’s the heart of the matter in the series. There are some quirks about this chapter and I won’t spoil it but it kind of skews from the traditional mythology of the series, especially concerning Jack Harkness. But in the end, it is a TORCHWOOD series and we take the good and great with the troublesome and annoying.