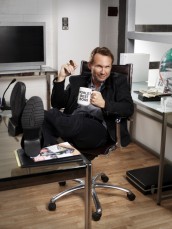 During the BREAKING IN press event at WonderCon 2011 in San Francisco, executive producer  Doug Robinson thinks that debuting the series in April is actually a positive rather than a negative.

“I think it is a huge advantage, especially when you have AMERICAN IDOL as a lead-in,” Robinson says about the series which focuses on a high-tech security firm of misfits. “You know that at least you are going to get a lot of people that aren’t going to watch anything at 9:30 p.m. because the families are done watching TV. I would take seven episodes to watch a show after AMERICAN IDOL rather than being another show launched in the fall or a mid-season show.”

BREAKING IN has been an on-again, off-again, on-again love affair with Fox which didn’t pick it up to series last Spring, but had a change of heart shortly after that.

“This show has been a struggle to get it picked up,” says Robinson. “We shot the pilot over a year ago and it did not get picked up for the fall schedule. Fox liked it and it tested very well. So they came back and said ‘OK, write two scripts and we’ll still consider it.’ So [executive producer] Adam Goldberg wrote two very good scripts and we have a great cast and the show tested really well. So they gave us seven episodes. At that time we did not know we would air after AMERICAN IDOL, so for us it has really worked out for the best.”

BREAKING IN debuts on Fox on Wednesday, April 6.

News: DALLAS will deal with the death of Larry Hagman on the series - ...
CD Review: ANGRY VIDEO GAME NERD: THE MOVIE soundtrack
CD Review: THE ARK AND THE DELUGE soundtrack
THE CONNERS: Actress Sara Gilbert on Season 2 - Exclusive Interview