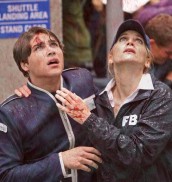 Not a blockbuster way to begin the season, but as always with this series, there's tons of potential

I had high hopes for the reboot of V when it aired last year. The classic series was fun and had some great moments but it was always cheeseball with lousy special effects and props. However, what made up for it was great storytelling and of a resistance that actually was organized, motivated and did something.

The first season of the rebooted V could be characterized as having none of that and even the special effects for today’s era were lackluster. Instead we were diluted with “save the target of the week” episodes that just ended up being boring and repetitive. Luckily, we got some good stuff here and there and the promise of a good series was always there.

Now, given the series had so-so ratings and I was not alone in my assessment of the first season, you’d think they’d come out and blow the barn doors off the opener of Season Two in “Red Rain.” Well … you’d think.

“Red Rain” wasn’t a bad episode, certainly better than the schlock they gave us in the first season, but in some ways it was again “save the target of interest of the week” but at least this time they recruited him. I always laughed at the fact that the people they did save in the previous season were never recruited or used. What I thought was funny was that they were all totally open to say “Oh yeah, that guy is a Visitor” and even Ryan (Morris Chestnut) was coming out saying “That’s one of us” and similar phrases. They kept it a secret on purpose and hid these tidbits from the other people in the first season. Just amusing, albeit frustrating at the same time as how poorly the first season trotted along at times.

I understand that budgets are tight and you have only a certain payroll you can afford, but extras can’t cost that much, right? At least to mask that there is some sort of actual resistance rather than just four people. Or how about digitally duplicating the four actors you have already. Then there would be eight, right?

Here’s how I’d begin the second season, after seeing what Decker (Scott Wolf) had seen on the mothership in the finale he’s anxious to redeem himself and prove that the Visitors are not our friends, while skeptical at first, the Fifth Column agrees to have him help (much like we saw in this episode) but they plan to expose the Visitors. They organize a high profile media event where Decker gets the Fifth Column in and we have a reboot of the original scene where the resistance tears off the face of the leader of the Visitors revealing him to be a lizard creature.

The lines are then drawn. The resistance is exposed. The Visitors are exposed. Let’s go from there. Maybe we are working toward that with Decker, and hopefully so, but I’d do it from the start. Get fans pumped. Get them ready for the season ahead by dropping a 50 ton crate on the series and taking it entirely in a new direction. Well, that’s what I’d do.

What they did was OK. They cleared up the red sky by explaining it is introducing dangerous levels of sulfur into our world – for a reason we don’t know other than possibly terraforming or breeding (or both). They re-established Jane Badler in the series as the mother to Anna (Morena Baccarin). They showed Laura Vandervoort in her underwear again (always a plus). They recruited a scientist to fight against the Visitors – badly needed. They showed Anna still suffering human emotions, although not sure where they are going with it.

What they didn’t do was establish a firm, solid, numerous resistance outside of four, well now five. They continued the terrible plot with Tyler (Logan Huffman) and Lisa (Vandervoort). They didn’t give us any blockbusters. They didn’t give us something that may carry the entire season, something that could crescendo to a big episode. I was hoping for more, but as with the history of this series, the potential still exists for it to come through.