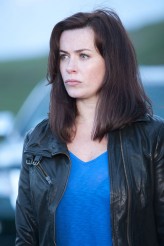 Finally back on track! One of the best episodes yet!

The latest episode of TORCHWOOD: MIRACLE DAY should have been titled “Redemption”. This is where things finally move forward towards our inevitable conclusion, which is odd, because it really feels like a lot of what we spent time watching in the middle doesn’t  really matter any more.

“Immortal Sins” gives us some more of Captain Jack’s past (the time period he was living waiting to catch The Doctor back on Earth…which didn’t happen until the 10th Doctor) and gave us a bad guy that is the head of everything and the probable cause for “The Miracle”.

So let’s do a quick run-down of things that seemed incredibly important to the writers during the first couple of episodes that now seem to be negated and moved to the backseat, since we find out who the big bad is:

1. Oswald Danes (Bill Pullman) the serial killer who becomes the spokesman for “The Miracle” – gone but not completely forgotten. He is mentioned in this episode briefly.

2. PhiCorp the “evil” pharmaceutical company that Jack (John Barrowman) and Gwen (Eve Myles) took more than a few beating to infiltrate. With last week’s episode we know that they aren’t really behind the miracle…further proven by the revelations of this week.

3. Rex Matheson (Mekhi Phifer), Dr. Juarez (Arlene Tur), and Esther Drummond (Alexa Havins) the three American’s involved with the Torchwood team. One is dead at this point and the other two have taken a back burner to Gwen and Jack- which is kind of inevitable since the show has been about them all season. So did we just waste time with all of the relationship stuff with these characters up to now? Esther’s crazy sister, and Rex being a complete ass and then slowly becoming more human…what was it all for?

4. Jilly Kitzinger (Lauren Ambrose) the publicist that always seemed to be at the heart of Miracle Day, and had me wondering if she was some kind of other being that was part of the larger conspiracy. Guess not.

There were HUGE amounts of time in the earlier episodes all dedicated to those various plot threads (so much so that Jack felt like a guest star), which literally all fall away at the end of this latest episode and it makes me feel like saying, “Of course not. Communism was just a red herring.”

I really enjoyed the new episode this week. This was what I have been waiting for them to bring it back around and make the series about the characters that we care about and have spent years investing time in. Jack’s story from the past of course turns out to be incredibly pertinent to the current situation, and we got some more hot gay sex scenes out there for all of the fans (myself included) who want to see more of John Barrowman than is allowed on network TV (but is allowed on cable Hallelujah!).

So let’s rev-visit the “gaying” of Jack Harkness for a moment. Yes, this was yet another love affair with a man, but when Jack and Gwen are talking towards the end of the episode, Gwen asks him how many children he has had. So there was an admission and a bit of a balance to his sexuality or his omnisexuality.

The only thing that made me crazy in the flashbacks is that Jack is wearing his modern costume in 1927. WTF? Every other time that there has been a period scene with Jack in any other of the Torchwood series, he has been in appropriate period clothes, and not parading around in crisp new shirts from JC Penney. His clothes looked incredibly out of place and I don’t know if that was a costume design choice or a producer choice but it was a BAD choice. It really takes me out of period scenes when you have an element that looks so glaringly out of place when it doesn’t need to. Granted the second chapter of the flashback he had period clothes on for a minute, but I assume that was because they didn’t want blood on the hero costume.

I enjoyed the dialogue between Jack and Gwen both in the car and at the end of the episode, and it was nifty that PC Andy (Tom Price) got to burst in with a swat team and save Gwen’s family. My only question there was where is Gwen’s dad that they went to all the trouble to break him out of the camp?

Nana Visitor shows up for a cameo and reveals that one of Jack’s old flames is responsible for “The Miracle” and all of this can conceivably be traced back to the flashback sequences with crazy Italians taking bottles of Jack’s blood. Plus there was a group of three man who were planning to buy Jack to use for their own means, and when they shook on the deal they formed a triangle (the same symbol the big bad that caused this whole mess uses to ID themselves on phones and the like).

All in all a MUCH better episode of TORCHWOOD. More Jack and Gwen. More Jack’s past. More back in Wales with Gwen’s family. AND…a mention of The Doctor!