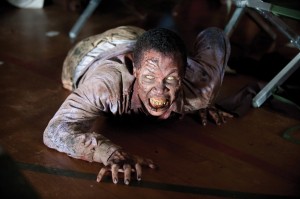 In the second episode of THE WALKING DEAD Season 2, “Bloodletting,” Rick (Andrew Lincoln) finds a possible safe haven for the group while seeking help for Carl (Chandler Riggs), and Shane (Jon Bernthal) undertakes a mission to obtain medical supplies to save Carl’s life. New friends are made, but how long can any alliances last in a world where the ravenous dead are waiting around every corner?

After a somewhat disappointing season opener that suffered from odd editing, uneven pacing, and a lack of distinctive set pieces (apart from the early attack of the herd), this installment features a more satisfying balance with the usual powerful performances. We also reach Herschel’s farm this week, a location well known to readers of the comic book series. Given the TV show’s tendency to go way off the graphic novel map last year, however, this does not mean we can expect to see the same plot threads play out as they did in the comic’s pages.

Another few words of caution: while the zombie genre is usually best focused on the living characters, with the dead as a backdrop for exploring the human condition, there still needs to be a strong presence of the “walkers” or it just becomes a hard-boiled tale of survival that lacks its most potent metaphorical element.

The serious lack of zombies in this episode (until the end) doesn’t bode well, especially since we know that AMC – in their infinite lack of wisdom – actually wanted the show to reduce the reliance on the titular characters this season. Why? Who knows why television executives think of any of the stupid things they come up with? Budget issues, presumably, but never let it be said there wasn’t a hit that a network couldn’t kill with over-thinking.

Still, this is only the second episode of the season, so it’s too soon to sound the alarm bells. The episode does do well by most of our cast, especially the Rick/Lori/Shane triangle. Bernthal’s Shane has really emerged from the shadow of the clichéd “other man” role, reaffirming his strong bond of friendship and almost-brotherhood with Rick, caring for him in this episode and even going so far as to reinforce for Rick how important Rick’s family is while he shoulders the burden of protecting the three of them.

It’s also good to see Rick out of it for a change, spiraling into near catatonia at Carl’s brush with death. Kudos too to Chandler Riggs for selling Carl’s agony in the torturous scene showing Herschel’s removal of the bullet fragments. And while Lori (Sarah Wayne Callies) continues to display an incredible potential for insane judgment, criticizing Herschel for being a vet when he’s the only man standing between Carl and death, she does get a wonderful moment when she stands up to Rick and demands that he stay to fulfill his role as father and husband.

As for the others, Dale (Jeffrey DeMunn) and T Dog (IronE Singleton) shine in one tense conversation while newcomers like Herschel (Scott Wilson) and Otis (Pruitt Taylor Vince) come across as warm people not necessarily in keeping with their images that might turn into even more well-rounded characters with a bit more development. Glenn (Steven Yeun), however, has been marginalized in the last two weeks, but knowing how the farm sequence pans out in the comic, perhaps there’s potential for Glenn to have some decent material soon even if the TV show diverges on other aspects of the story.

This zombie-light episode at least concludes with a tense mission to get medical supplies, but the creatures’ behavior is definitely shifting. For one thing, they don’t seem to have nearly the acute sense of smell that was such a major plot point last year, or else they would surely have pegged Shane and Otis sooner. On top of that, bright lights now apparently sway them more than the presence of living flesh – why do I keep hearing “sky flowers” in my head? As for their tendency this year so far to get up to a faster clip, they’re still well within Romero rules; after all, the Cemetery Ghoul from NIGHT OF THE LIVING DEAD jogged pretty briskly in that film’s opening scenes.

Next week looks a bit more action-oriented as Shane and Otis will have to find a way to escape the horde and get back to the farm with the much-needed supplies. What other challenges lay ahead in this post-apocalyptic hell? Let’s find out!

Profile: Mark Wahlberg gets into the ring for THE FIGHTER
Movie Review: SUCKER PUNCH
TV Review: DOCTOR WHO – Series 8 – “Robot of Sherwood”
TV Review: BONES – Season 11 – “The Cowboy in the Contest”

Leave a Reply to Bobby