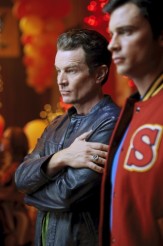 A superb 200th episode takes Clark on a journey through the past, present and super-future 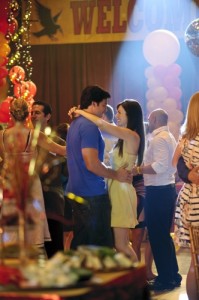 The 200th episode of SMALLVILLE arrives with a very fitting story – tracing Clark Kent’s past, present and future in a sort of superhero version of A CHRISTMAS CAROL by way of IT’S A WONDERFUL LIFE.

“Homecoming” features a distraught and disillusioned Clark hiding from the world both as himself and as the Blur. Meanwhile, his friend Oliver Queen (Justin Hartley) is carrying the brunt of the vigilante hatred on his shoulders now that he’s come out as the Green Arrow.

Lois (Erica Durance) who knows he’s the Blur, but hasn’t told him, wants to shake him out of his shell. She convinces him to attend his ten-year high school reunion. While there, everyone remembers him as the small-town farm boy who became the big football hero. Yet, it’s a bit too much for Clark – he has to face that Chloe is missing and Lana Lang is no longer with him.

Then former foe Brainiac (James Marsters) shows up. Clark is ready for a fight, but discovers that he’s from the future. Brainiac is now a good guy and part of the League – and wants to guide him along the right path so he can help Clark, like Clark helped him.

Brainiac shows him Pa Kent’s death and says he needs to let go of the past and stop hanging on to wanting to be able to save him. He sees the present with Oliver needing Clark, but Clark not being there. He also glimpses that Lois clearly loves Clark, but Clark keeping her at a distance because he doesn’t want what happened to Lana to happen to Lois.

And then it’s time for the future, where he sees what he becomes and how he and Lois are happily married – and she knows his secret. There’s even an homage to the first SUPERMAN movie with Lois endangered in a helicopter.

This starts to open up Clark’s world once again. He begins to see the positive and he now has the motivation to move forward in his life. The episode concludes with one of the most magical moments in the entire series. Since he and Lois missed the dance at homecoming, he puts a mirror ball at his place and has a special dance with Lois. As they begin to dance and live in the moment, Clark elevates Lois off the floor – and neither of them notice.

Writers Brian Peterson & Kelly Souders do an excellent job of paying homage to the last ten years of the series (there’s a nice nod to the freaks of the week), while also moving the Superman story forward for the series finale.

Director Jeannot Szwarc helms this episode, and he also does a fantastic job balancing the whimsical moments with the romance. This is definitely the best episode of the season so far. It also gives Welling and Durance a chance to bring Lois and Clark closer together. They’re such a great Lois and Clark, and they don’t get enough credit for making them their own.

SMALLVILLE once again proves, ten seasons in, that it still hasn’t lost the super power mojo that made it so special in the first place – and shows that the series is clearly going to go out with style.