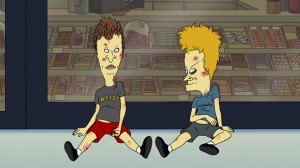 After 13 seasons of KING OF THE HILL and three live action feature films, Mike Judge has resurrected his seminal 1990s MTV animated series BEAVIS AND BUTT-HEAD.

For eight years, Mike Judge voiced these  dunder-headed creations – simpleton rockers who critiqued music videos and had an affinity for fire and frog baseball.

The insidious laughter, the simple observations – it was actually quite funny and it got Judge in a lot of trouble when kids started taking their antics a little too literal.

Now, with JERSEY SHORE and TEEN MOM all over MTV, BEAVIS AND BUTT-HEAD almost feels tame in comparison.

With its return (it’s officially Season 9 and now titled Mike Judge’s BEAVIS AND BUTT-HEAD), the boys are as idiotic as ever. The first segment “Werewolves of Highland” is actually quite funny. When they realize women are obsessed with TWILIGHT films and men who are werewolves and vampires, they decide they want to be werewolves and vampires too. So they try to find someone to bite them. This results in them locating a homeless man with hepatitis among other things.

It’s a pretty funny episode – reckless, silly and on target. The second episode is the shorter  ”Crying” with Beavis and Butt-head at their simplistic best. When Beavis finds an onion in his hotdog – the smell makes him shed a tear. Now, Butt-head will never let him live it down. Yes, it’s that simple.

In the middle of these stories, Beavis and Butt-head comment on scenes from JERSEY SHORE, and three different music videos. It’s very strange to see music videos again back on MTV, but the clips they’ve picked (particularly “Kids” from MGMT) almost make you wish MTV brought back videos in some regular capacity. These videos have to seen to be believed.

Strangely, as I mentioned before, BEAVIS AND BUTT-HEAD really do seem far more innocent and restrained than many of the shows, movies and reality series that have aired since this series went off the air in 1997. Judge has done far more edgy and mature work with his feature films (OFFICE SPACE, IDIOCRACY and EXTRACT), but it’s nice to see him getting back to basics and throw down with these iconic characters again. Judge shows how “dumb” is supposed to work – and it’s always been smarter and funnier than most network sitcoms combined.