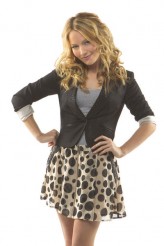 A huge rebound transforms an iffy show into something quite good 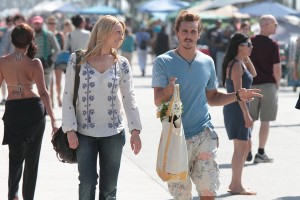 It’s taken two weeks, but the initially dreadful LOVE BITES has grown, just two episodes in, into something quite watchable and sort of entertaining.

Yes, you heard me say it – the show is getting better and is attempting to take its love connection stories and actually striving for something a little more complicated, slightly more real and far more engaging than it initially started out with.

This NBC series, which is being burned off in the dead of summer, is an anthology show about love and its many pitfalls. Trying to keep some consistency are cast members Annie (Becki Newton), Judd (Greg Grunberg) and Colleen (Constance Zimmer) who usually have some involvement with at least a couple of the guest stars who pop up in the three different segments each week. And, in another nice surprise, last week’s guest star Michelle Trachtenberg returns in a supporting slot, so here’s hoping we see more of her in the coming weeks.

The first segment is “Goodbye, Boob”. It’s a very daring little micro-sode that follows one of Judd’s co-workers at the tattoo parlor he owns. The guy is Dan (Steve Talley) and he always says the wrong thing and the wrong time. Essentially, he lacks social etiquette. Dan’s been obsessing about a girl in Venice beach named Alex (Laura Prepon). When he finds out that she’s having a party, he decides to crash it with Judd and that’s where he discovers it’s a “goodbye boob” party. Yes, Alex is getting a mastectomy. It’s during his experience here that Dan grows up a little bit and the pay-off is actually quite sweet and endearing.

This segment is such a tricky one to pull off. If the writing in the pilot was the same here, it would have been a disaster, but it’s not. Instead, it’s filled with so much tact, care and heart, it’s by far one of my favorites of the entire series so far.

The next segment is “Ninja Vanish” And features former SCRUBS star Donald Faison as Ricky – a ladies man who has a stealth move for his one-night stands. He takes their cell phones, erases his number and then never has to see them again (while the women think technology is the bad guy). It’s a fun and quick story with Faison carrying the weight of the episode on his shoulders (which he can more than handle). It also reminds you how much you miss him and SCRUBS.

Finally, “Cutlets” rounds out this week’s episode putting the spotlight on Annie who is pregnant with her sister’s child. She’s set her up on a blind date by her sister with a guy named Matt, and she’s nervous to go out on one while still pregnant, but she relents. However, she meets the wrong Matt (Matt Long) at the bar and soon realizes the real Matt (Matt Winston) is too creepy for her. Thankfully first Matt saves her and she has an okay night with him.

There isn’t anything all that special about this segment, but the writing is snappy and it gives Newton a chance to be in the spotlight a little more (and she’s definitely growing on me).

LOVE BITES gets the most improved award. I wasn’t sure how this show would survive such an asinine premiere episode, and I was sure this was going to be a trainwreck moving forward, yet, the series has proved me wrong. “Keep on Truckin’” has moments that are better than most big screen romantic comedies. The show still has many more weeks to go, but if the quality and guest cast continues to hold up as well as this, then it may very well end up being one of the most pleasant (okay, SHOCKING) surprises of all of this summer’s network offerings. It’s not saying much, but you take the new scripted network programming whenever you can get it.