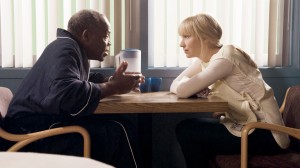 LEVERAGE has employed flashbacks and allowed the regular cast members to play different sorts of characters (as part of running their scams), but it does both of these things in a new way in “The Van Gogh Job.” Series creators John Rogers & Chris Downey have gotten together to make an episode, with Rogers directing and Downey writing, which is primarily concerned with guest characters – but with our heroes embodying these people. This allows Aldis Hodge and Beth Riesgraf to showcase what they can do by playing people who are a lot more normal and straightforward than what they usually do as, respectively, Hardison and Parker.

Nate (Timothy Hutton) hears about a legendary Van Gogh painting that is worth approximately one hundred million dollars. It is believed that 88-year-old Charlie Lawson (Danny Glover) spirited the artwork out of France when he was a soldier at the end of World War II, but no sooner does Charlie return to Atlantic City than he is first set upon by a thug, then winds up in the hospital with chest pains.

After some wrangling, he agrees to tell his story, but only to Parker. As a young man, played in the flashbacks by Hodge, Charlie was in love with Dorothy Ross, played by Riesgraf. Dorothy returned Charlie’s love and they wanted to run away together, but were thwarted time and again by the virulent racism of Dorothy’s father and his goons. Charlie gave Dorothy the painting for safekeeping and she hid it well. She finally gave up waiting for Charlie, married another man in 1957, had a daughter and died three years before Charlie returned to town. However, between Charlie’s tale and the daughter’s cooperation, Nate deduces that Dorothy hid the painting in one of the pipes of her beloved Wurlitzer. The painting is donated to a museum and Charlie is consoled with the knowledge that Dorothy kept faith with him all her days. He counsels Parker to seize the day, and Parker exchanges a meaningful look with Hardison.

Downey’s teleplay does a good job of depicting historical racism without sliding into undue melodrama, but what really sells the piece is Hodge’s utterly grounded, dignified Charlie, capable of profound warmth toward his beloved Dorothy and still, seething fury at his tormentors. He neither sounds nor behaves like Hardison. Riesgraf’s Dorothy is a much more conventional person than Parker, but it’s good to see the actress get to play someone more relaxed and open. Glover gives the present-day Charlie gravitas and the force of his presence convinces us that this is truly a man of the world.

Rogers also does an excellent job of staging some complex action sequences, including a WWII-era gun battle that looks as though it came straight out of a period war movie. The production design and cinematography are both excellent.

Although it doesn’t move the main story along because we’re not in the main story much, “The Van Gogh Job” is a standout stand-alone episode of LEVERAGE.