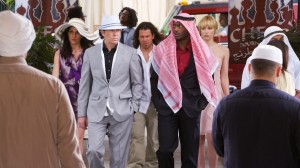 There’s nothing like finding an old friend on a series like LEVERAGE and as “The Queen’s Gambit Job” wraps up the Season 4 summer finale (more episodes air in November), the series brings back the team’s constant nemesis Jim Sterling (Mark Sheppard).

Most of the time Sterling is there to thwart the team’s various jobs, but this time, he needs to enlist them for reasons that we later learn are far more personal.

The myriad plot point revolve around a Chess tournament in Dubai and potential nukes resulting in Nate (Timothy Hutton) having to pawn himself off (so to speak) as a chess champion (he’s quite good).

Meanwhile, Parker (Beth Riesgraf) and Hardison (Aldis Hodge) are full of sexual tension as he aids her in one of her more complicated thieving gigs. 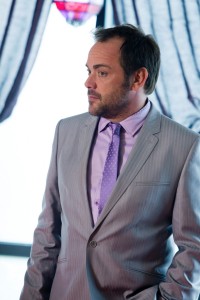 It’s the pairing of Eliot (Christian Kane) and Sterling that provides much of the show’s humor this time out. They’re great together in this antagonistic buddy-cop sort of way. All I can say is more Kane and Sheppard together – it’s gold.

As usual, the Leverage team continually finds its plans going awry during the con, but as expected, the person who make their almost perfect con go bad is Sterling himself.

Ironically, he was in Dubai to extract not a nuclear device, but his daughter. The one Nate never knew he had.

The last ten minutes of this episode is as good as LEVERAGE gets – with Nate’s own struggles with losing his son (and doing everything he could) echoed in Sterling’s own personal story. It really opens up a whole other dynamic between Nate and Sterling. We knew they were really good friends, and we get a glimmer of that throughout this episode.

Like many of Season 4’s episodes, the episode jumps right into the thick of the action, getting rid of a lot of the exposition in a fast and furious way. This kind of storytelling is good and bad – because very often as a viewer you’re still trying to catch up to what’s going on while the team is already in the middle of their con.

Yes, this is an integral part of the show, but the set-ups are getting more and more abbreviated as the series moves on – assuming the fans have now become accustomed to the formula and don’t need to have their hands held as much any longer.

Director Jonathan Frakes does an excellent job balancing all the different elements in this episode, but where he really shows off his considerable skills is creating a very well shot and edited chess showdown. It provides the episode with something new we haven’t seen before and does it in an engaging and clever way.

The sexual tension between Hardison and Parker is still handled quite well – and when Hardison tells Parker he has her back, it pulls exactly the right heartstrings for it to feel sincere between the characters and for the audience.

LEVERAGE has had a good run this year, and with the summer finale, it leaves things, like all good series do – having you want more.

Click on link: Exclusive Interview with Aldis Hodge on Season 4

Click on link:Review of LEVERAGE – Season 4  – “The Hot Potato Job”

Click on link: Review of LEVERAGE – Season 4 – “The Long Way Down Job”