The bad news - Morgan still has the Intersect; the good news - it's getting better. 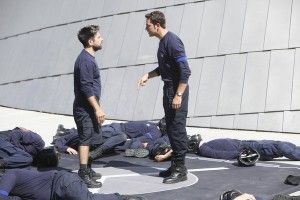 I think it’s safe to say that among the CHUCK faithful, it’s pretty universally acknowledged that letting Morgan (Joshua Gomez) have the Intersect (basically all the CIA and NSA intelligence downloaded into the brain) was a massive, colossal mistake. And while last week’s episode seemed to cement that opinion with Morgan acting like a complete and total jerk, it did end with a tiny glimmer of hope that there might be something more to this than just a massive, colossal mistake.

The problem is that the first half of this episode does little to fan that glimmer of hope. Morgan seems to be acting out worse and worse. Chuck (Zachary Levi), Morgan’s best friend since childhood and the former Intersect, writes it off to Morgan acting out the way he did when the two were in seventh grade and Morgan grew a mustache before all the other kids.

Oh, yeah. There’s a spy plot in here, as well, but it’s comparatively irrelevant. Chuck’s team is asked to extract another spy for the bounty on his head – and it gets a little sticky when Morgan goes rogue and leaks the assignment to competitor Gertrude Verbanski (Carrie-Anne Moss), for whom John Casey (Adam Baldwin) has a rather serious thing.

Also, General Beckman (Bonita Friederancy) is finally back, although just as a guest star. And Chuck’s brother-in-law Devon, who’s taking a turn as a stay-at-home dad to baby Clara, finds out something that will change the whacked out Buy More employee Jeff (Scott Krinsky) in a way that can’t possibly be imagined.

Even better, as Sarah finally convinces Chuck there’s more to Morgan’s bad behavior than ego, we get to see actor Joshua Gomez give his acting skills a bit of a workout. There’s some real drama here and it works – certainly better than the show did for the first two episodes of this season. The question now is how are the producers going to make the rest of the season work? They’ve finally set it up so it can. And while we’ve seen perfectly lovely shows get trashed by producers trying to mix things up, I personally want to believe that Chris Fedak and Josh Schwartz do have a plan and that it will all work out so wonderfully well that we’ll be thrilled and talking about it 12 years from now.

I also want to believe that the Chicago Cubs will win the World Series in my lifetime, that Starbucks will stop roasting its coffee to charcoal and that we’ll have World Peace. It could happen.

Leave a Reply to Philippa Chapman