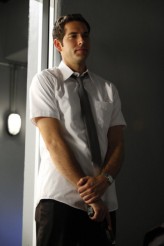 A self-contained whodunit episode with some scares and laughs

With last week’s plans for the Gretas to become the next generation of Intersect Agents, this week on CHUCK, Chuck (Zachary Levi) is put in charge of finding more agents like him (namely geeky and emotional) to have the Intersect put inside their head.

In “Vs. The Muuurder” there are four potential candidates, but someone wants them all dead and it results in a whodunit in the Castle basement.

The show plays on Scooby-Doo contrivances as Chuck begins eliminating the suspects off the list. Number one is NCS agent Jane Bentley (Robin Givens) who doesn’t like Chuck because he stole his job from her and she wants him to fail – miserably.

However, the real culprit turns out to be one of the Intersect candidates who was paid by Vivian Volkoff to get rid of Chuck since he put her father away. Now Chuck has a “nemesis.”

This week, we get some long-missing Buy More shenanigans as Big Mike (Mark Christopher Lawrence) is kidnapped by a rival big chain store and Ellie (Sarah Lancaster) finally uncovers more data on her dad’s computer. By episode’s end, her entire body is scanned by the computer and uploading information for something called “Agent X Files.”

My suspicions that Ellie may be groomed to be a sleeper Intersect agent is starting to come to fruition. Could be very interesting.

“Vs The Muurder” is a rare CHUCK episode, in that it’s super-self contained and it tries to do something the show has rarely done – namely a whodunit scenario.

While not as strong as previous episodes this season, “Vs. The Muurder” is still a fun, escapist episode that give Levi a chance to shine as the geeky version of Angela Lansbury’s Jessica Fletcher character from MURDER, SHE WROTE.

The big twist though is the whole Ellie subplot. It’s exciting to think Ellie will actually be given a substantial subplot other than being a new mommy. Honestly, I can’t wait for this pay-off.

Other than that, Casey, once again, is sidelined this episode. As much as Chuck talks about the “team” – the writers still haven’t found a way to bring back the “essential” Casey from earlier seasons. I get that Chuck and Sarah have grown together as duo, but Casey needs to get back into the mix in an organic way and start kicking some major butt.