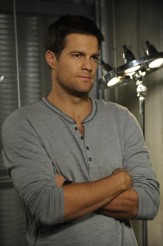 The long-heralded spin-off episode whirls into view, trying to do too much within the BONES universe 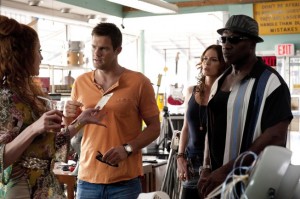 Just when we’d forgotten all about it, BONES hosts a pilot spin-off hour, “The Finder.” When Booth (David Boreanaz) and Brennan (Emily Deschanel) are called out to identify a corpse in the Everglades, they quickly deduce that murder has been done. The victim was a museum guard who stole a piece of a map that purportedly showed the location of centuries-old sunken treasure. To locate the map fragment, Booth enlists the services of his old Army frenemy Walter Sherman (Geoff Stults), who is a genius at finding things, although he has a severe problem with paranoia owing to a wartime brain injury.

Although our regular BONES characters appear here and interact with Walter and his two sidekicks, pilot/bartender/London East Ender Ike (Saffron Burrows) and quotation-citing muscle Leo (Michael Clarke Duncan), “The Finder” doesn’t really feel like a BONES episode. On the other hand, with its great clumps of exposition and emphasis, “The Finder” doesn’t really play as comfortable with its own identity. Various character points are hit again and again in case we didn’t get them. Walter and Ike have personalities currently more suited to situation comedies than even very light crime drama, as both are colorful to the point of seeming a little unworldly.

None of this may necessarily mean much in the long run, as shoehorning a pilot into an episode of another series often short-changes both (see the CRIMINAL MINDS: SUSPECT BEHAVIOR pilot that appeared as an episode of the parent show) without giving a true idea of what the new project will be like. The characters in “The Finder” (which is based on Richard Greener’s THE LOCATOR books) show potential, especially if they are allowed a little more subtlety once they’re on their own.

As a BONES episode, however, “The Finder” disappoints. Our regular heroes – the ones we tuned in for, expecting to see them searching for underwater riches – are largely sidelined. Brennan does get a nice emotional moment, though we wonder why she couldn’t have found it herself. When we find out why Booth dislikes Walter, it seems out of character for the FBI agent to have contacted the tracker at all. Six seasons in, it seems reasonable to spend one episode of BONES doing something different, but it also seems reasonable to hope that it’s back to business as usual at the Jeffersonian next week.

The X List: MACHETE is one of the Highlights to DVD and Blu-ray Titles...
Exclusive Interview: Being one of THE NEIGHBORS is alien to Simon Temp...
THE PEOPLE V. O.J. SIMPSON: Sarah Paulson on playing Marcia Clark - ex...
Exclusive Photos from SULLY Los Angeles Screening