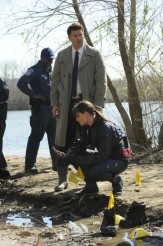 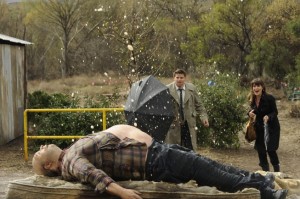 As regular viewers of BONES know, Dr. Temperance Brennan (Emily Deschanel) is brilliant in many areas, but she’s largely unskilled in the art of apology, or even recognizing when she’s behaved in appropriately.

In “The Feet on the Beach,” this issue comes to the fore when eight sets of disembodied feet wash up along the U.S./Canadian border. The Canadian scientist, Dr. Filmore (Scott Lowell), on the case specializes in forensic podiatry. It emerges that Filmore has been so personally devastated by an article Brennan wrote disparaging his work that the podiatrist has lost the use of his right arm.

While Filmore comes to the Jeffersonian to help the team figure out where all the feet came from and whether there’s been a murder – as usual, the answer is complicated – Sweets (John Francis Daley) tries to get Filmore to confront Brennan and Booth (David Boreanaz) attempts to persuade Brennan to apologize for her dismissive behavior.

With all of this going on, Hodgins (T.J. Thyne) discovers that supervisor Camille Saroyan (Tamara Taylor) has forged an application to Columbia University on behalf of her adopted daughter – and that the application has been accepted.

“The Feet on the Beach” is good fun on many levels. We get a good ratio of clues to detection, with the added bonus of a character name, Wolfram, as a shout-out to Boreanaz’s old gig on ANGEL. We get Brennan wrestling with trying to understand why other people perceive her as they do, and Booth oh-so-gently trying to help Brennan to present herself in a way so that others can see what Booth does. We get Sweets being solidly professional and a bracingly angry confrontation between two regular characters who normally defer to one another. We even get a pleasingly twisty resolution of Cam’s dilemma.

One of the consistently enjoyable aspects of BONES, when it is on its game, is the way it introduces us to aspects of the world that wouldn’t occur to most of us. “The Feet on the Beach” gives us academic body farms, where budding pathologists learn about decomposition (Brennan and Booth have dependably different reactions to this environment), along with some variables that we might not consider at first.

There is a danger in some BONES episodes of the characters’ concerns about how they should react to one another tipping over into sitcom territory, but in “The Feet on the Beach,” the balance feels right.