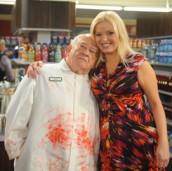 The actor also talks longevity and his new series on CMT

While speaking at today’s TCA Winter 2011 press tour, Ed Asner, while promoting his new CMT sitcom WORKING CLASS (which premieres January 28) admits that his former THE MARY TYLER MOORE SHOW co-star Betty White is still hot (she was on the previous panel for her TV Land sitcom HOT IN CLEVELAND).

“I just had cataracts, still adjusting, but what I see is looking pretty good,” says Asner with a laugh.

WORKING CLASS is the first scripted sitcom for CMT and stars Melissa Peterman as a single mom striving for a better life with her kids and befriending a cranky neighbor Hank (Asner).

“What I think is great about the show, it’s not just for the CMT viewer,” says Peterman. “That’s the hope and dream. It’s not specifically for CMT, it’s for anyone who wants a good family sitcom.”

The series will also reunite Peterman with her former REBA co-star Reba McEntire who will guest star in the third episode (with the potential for more appearances down the road).

“She came to the set and she told me she was very proud of me and this had the right feel,” says Peterman who says her role on the show is a bit of a role reversal for her. “For six years [on REBA], I played the other woman who stole her man. So she came on [our show] and played my ex-husband’s new lady. It’s going to be fun for fans to see this role reversal. I won’t lie. I think she enjoyed the payback a little bit.”

As for Asner, he’s happy with the resurgence with his career, especially after the success of the Pixar animated film UP (where he voiced the main character).