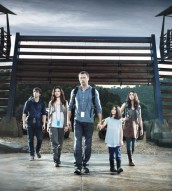 There’s been a lot written about the new ambitious Fox science-fiction series TERRA NOVA (which will air a two-hour premiere on May 23 and follow with the full series in the fall), but for the first time, the executive producers and cast were able to get together and chat in more detail.

At today’s Winter TCA session for Fox, executive producer Brannon Braga says the reason for the two-hour premiere was due to “too much story.”

“We struggled for a long time how to fit it all in into 60 pages,” says Braga. “There was a meeting with the network looking at each other, ‘what are we going to do’ and it was ‘let’s make it two hours’ – but there were challenges doing it as a two-hour too.”

TERRA NOVA is set in the future where earth is dying and a group of settlers are sent back in time when dinosaurs ruled the earth to restart civilization.

The show will also give the producers an opportunity to showcase known dinosaurs and some of their own creations.

“You’re going to see dinosaurs you haven’t seen before,” says Graves. “We’ll be filling in some blanks.”

Steven Spielberg is also serving as executive producer on the series, and Braga says he’s been very involved every step of the way.

“Every idea he comes up with is genius and we wait for his feedback on all aspects of the show,” says Braga.

That said, Graves says having Spielberg involved was nerve-wracking for him as a director.

“Part of the terror of directing this is he’s watching everything you do,” says Graves with a laugh.

Another important thing Graves notes is that even though this show will have a mythology and deal with some time-travelling elements previously seen on other series, particularly LOST, that the big difference here is accessibility.

“TERRA NOVA is so made for a massively broad audience,” says Graves. “LOST was made for that great LOST audience. TERRA NOVA, more than anything I’ve done in my life is for everybody. Everyone from my kids, to a gamer to my dad will love this show.”

And for Braga, TERRA NOVA appealed to him because it was the first show he has been involved with that reminded him of his days working on STAR TREK.

“It’s the closest thing to working on STAR TREK,” admits Braga. “I wanted to gravitate toward science fiction with big ideas. Every aspect of this show appealed to me.”