TCA 2011: PHINEAS AND FERB feature film in the works at Disney 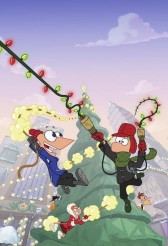 TCA 2011: PHINEAS AND FERB feature film in the works at Disney

It will be a combination of live action and animation

“This is in the early stages, but [Walt Disney Pictures is developing a] theatrical feature,” says Marsh. “It will be live action and animation and will also involve the creators Jeff “Swampy” Marsh and Dan Povenmire.”

This is on the heels of PHINEAS AND FERB being the most successful animated series for Tweens three years running and the first PHINEAS AND FERB TV movie ACROSS THE SECOND DIMENSION IN 2D airing this fall on the Disney Channel.

Leave a Reply to J. Severe