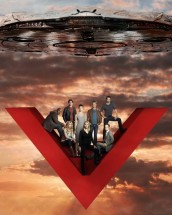 At today’s Winter TCA 2011 press tour, ABC Entertainment Group President Paul Lee spoke about the strategy for V – Season 2 and hopes the numbers continue to be as strong as the season two premiere.

“Those lizards just won’t die,” says Lee. “They keep coming back. We’re pleased with that. We wanted to give it space [by ordering] ten episodes, so we could quality control those episodes. We brought whole new ideas to it and amped up the adrenaline in that show to make sure it gets better and better.”