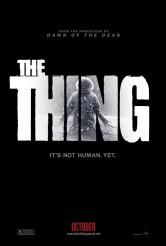 A serviceable remake of a classic sci-fi/horror tale

THE THING FROM ANOTHER WORLD, the 1951 feature film based on John W. Campbell Jr.’s short story “Who Goes There?”, has been ripped off so many times that it’s understandable that some people believe it has been remade repeatedly, In fact, until now, there has been only one official remake: 1982’s THE THING, directed by John Carpenter from a screenplay by Bill Lancaster, with special creature effects by Rob Bottin. Whenever a remake of just about anything appears on the horizon, it is typically greeted with skepticism – why redo X, Y or Z? THE THING is that rare film with a built-in explanation, as its premise lays the groundwork for the kind of FX-travaganza that cries out to be done again with today’s technology, in this instance, by Alec Gillis & Tom Woodruff, vs. what was achievable three decades ago.

The new THING, directed by Matthijs van Heijningen from a screenplay by Eric Heisserer, is ostensibly a prequel to Carpenter’s version of the tale, though the current adaptation certainly feels like a remake. In this case, a small group of Norwegian, American and British scientists and other specialists are brought together at a small station inAntarctica, where two incredible discoveries have been made beneath the ice. One is an enormous extraterrestrial spacecraft; the other is an alien life form, currently frozen solid.

Expedition chief Dr. Sandor Halvorson (Ulrich Thomsen) insists on taking a tissue from the creature, which turns out to be only dormant, not dead. The group of humans unhappily learns that the alien takes on the exact form of its prey, meaning that it can copy any one or all of them. Paleontologist Dr. Kate Lloyd (Mary Elizabeth Winstead) is determined not to leave the station so long as the threat exists, for fear it will spread across the planet.

For horror fans, the beats are sound enough, and the new creature shapes are intriguing, although the CGI augmentation feels a little less visceral than Bottin’s practical creations. However, this may be due in part to the fact that in 1982, we’d seen almost nothing like this, whereas that’s not the case in 2011.

The cast is fine, but beyond Winstead’s increasingly driven Kate and Thomsen’s high-handed Dr. Halvorson, few characters stand out, though Eric Christian Olsen does get one of the film’s best and most memorable lines when he protests the nature of Kate’s are-you-human test. Heisserer’s screenplay provides a smattering of good, deliberate humor. Even so, he and director van Heijningen aren’t able to make us feel a pang of, “Oh, no, don’t let X character turn out to be an alien,” and without this, there’s little emotional investment.

Another problem is that this Thing behaves illogically, showing itself when it could either remain hidden or leave earlier, and sometimes failing to give chase when there’s nothing we can see preventing it from doing so. This arbitrary behavior severely dilutes suspense.

Ultimately, the 2011 THE THING is an acceptable creature feature, but it’s unlikely to be anybody’s favorite thing, let alone considered the best possible THING.