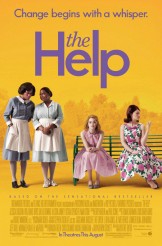 A tale of drama, laughs, and inspiration during the Civil Rights Movement

To start off with, seeing THE HELP, I unlike most people have not read the book. So pretty much the entire movie was new to me. I had a vague idea from my mother as to what the movie was about, but I had no clue as to the complete storylines of the book. I was completely sucked into the film in the first five minutes. The cast, setting, story, costumes, pretty much everything was so wonderfully done that you can lose yourself completely and not notice any time passing.

THE HELP is based on the novel by the same name written by Kathryn Stockett and set during the Civil Rights movement of the 1960’s. The story revolves around three central women: Aibileen Clark (Viola Davis), an African-American middle aged woman who has spent her life raising white people’s children, Eugenia ‘Skeeter’ Phelan (Emma Stone) a young white woman who wants to be a serious journalist, and Minnie Jackson (Octavia Spencer) an African-American maid who is the best cook in town and has to put up with a lot of horrible behavior inflicted upon her by her employer Hilly Holbrook (Bryce Dallas Howard). Aibileen, Minnie, and Skeeter find themselves working together during the height of racial tensions in the South during the Civil Rights Movement to write a book chronicling the lives of African-American maids from their point of view.

As you can imagine with the subject matter this film has a lot of sad, dramatic, and inspirational moments. The story and plight of African-American’s in the Deep South just prior to and during the Civil Rights Movement is vividly portrayed and for someone like me who is too young to have seen this portion of our nation’s history unfold, it is really truly eye-opening.  Both Viola Davis and Octavia Spencer create brilliant portrayals of characters that are not only sympathetic, but women you would want to be friends with and invite into your home on a daily basis just to bask in the warmth they emanate. Both actresses are adept at shifting through all of the complex emotions that they have to deal with as their characters, and all of the subtle nuances of portraying a person of color living within a caste system society.

I will shame-facedly admit that this is the first Emma Stone movie I’ve seen besides ZOMBIELAND, and she is just an amazing actress! She is completely at home again as with the other two female leads, right at home with all of the tough subject mater that this film addresses. I can’t wait to see her in THE AMAZING SPIDER-MAN, where she plays Gwen Stacy. Ironically enough the previous Gwen Stacy is in this movie as well. Bryce Dallas Howard takes an enormous step backwards from all of her loveable girl next door roles, or sympathetic characters to play Hilly Holbrook. This is maybe the bitchiest and most evil and manipulative role I have seen Dallas Howard in, and she is fantastic. You root for her to fall off of her various precarious perch in ladies’ Southern society, and you love to hate her every minute she is on screen.

The look of the film is absolutely perfect from the costumes to the sets to the props, to the locations used for shooting. Everything really looks exceptionally period and appropriate. The supporting cast that has such distinguished actors as Cicely Tyson, Sissy Spacek, and Allison Janney only adds another level of excellence to this film. Front to back this is a solid piece of movie making, and will no doubt garner a lot of awards for the cast and crew.

I did discuss the movie with my mother after I saw it, and she has read the book. She told me that the movie sounded exactly like the book, so if you have concerns about the film deviating from the written word, you can breathe a sigh of relief. This movie is something to go see and leave and feel good and inspired when you exit the theatre. It’s one of the best dramas I have seen in years and is all around a great movie experience.