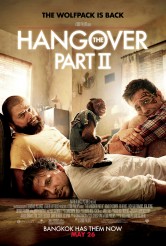 THE HANGOVER PART II isn’t especially funny. Don’t misunderstand – the movie isn’t direly un-funny like (random comparison) COP OUT. It’s genial, it has a plot that trots along decently, a good cast and gorgeous Thailand scenery. Still, it is struck somewhere between past glory that it can’t recreate and a new scenario that is better for adding novelty than jokes that land.

THE HANGOVER, as even people who didn’t actually see the film probably know, concerned a bachelor party weekend in Las Vegas that went disastrously wrong. However, throughout the trials and tribulations, we learned that the seemingly cynical-to-the-point-of-evil Phil (Bradley Cooper) was really a good guy, that beaten-down Stu (Ed Helms) had a gutsy side and that crazy Alan (Zack Galifianakis) really was crazy, and lonely, but would lay everything on the line for his friends.

Expanding on this would seem something of a challenge, and THE HANGOVER PART II doesn’t seem to have the least notion of how to address it. The sequel begins as the original did, with Phil telephoning Tracy (Sasha Barrese), who is now the wife of pal Doug (Justin Bartha), to say they’ve got problems – and this time, they’re even worse. Flash back to a week earlier. Dentist Stu is getting married to soul mate Lauren (Jamie Chung), after divorcing the hooker-with-a-heart-of-gold he married two years earlier (the story’s timeline matches the approximate time between the two movies). He’s having a destination wedding in Thailand, where his fiancée’s parents live.

Stu wouldn’t dream of getting married without his two best friends Phil and Doug in attendance – but he has to be strong-armed into inviting Doug’s brother-in-law Alan, who caused so much trouble last time. It seems Alan (brother of Doug’s wife) is heartsick about not being included in the wedding, so Stu reluctantly relents. Alan immediately begins acting up, as he is jealous of Stu’s sixteen-year-old about-to-be-brother-in-law Teddy (Mason Lee). In Thailand, Phil talks Stu and Doug into a single beer on the beach – Teddy and Alan need no persuasion. It all seems very pleasant. And then Phil, Stu and Alan wind up in a trashed Bangkok hotel room with no memory of how they got there – let alone why all they can find of Teddy is his severed ring finger.

It’s very possible that a big part of the problem here is the change in writers. The notion that film is strictly a director’s medium is generally baloney, especially in an enterprise like this, where characterization, dialogue and structure – all provided by the script – are paramount.

Jon Lucas & Scott Moore wrote the screenplay for the original HANGOVER. Here they get “characters created by” credit. The actors are as game as ever, and director Todd Phillips, returning from the first film, stages both mayhem and scenic vistas efficiently. However, Phillips and his co-screenwriters here, Craig Mazin & Scot Armstrong, don’t seem to know if they want to try for novelty or for the idea that the characters are going through a familiar nightmare, and never really commit to either. The filmmakers here also don’t seem able to replicate the emotional underpinnings that made the first film so funny. It wasn’t just that these characters were thrown into a series of outrageous, gross situations while discovering that they’d been involved in even more outrageous and gross situations during a blackout – it was that their reactions to everything put them on a path of self-discovery.

Here, most elements feel like retreads. Phil has mellowed out a little, so he’s got even less room for change, and Stu and Alan are going over the same territory. As for Teddy, he does something that is not so much outrageous as just plain disturbing – it questions, but no laughs. Ken Jeong is back as loopy criminal Mr. Chow, who is the new movie’s best source of unpredictable humor.

THE HANGOVER PART II has great scenery and a diverting-in-a-TV-episode-way storyline. What it doesn’t have are the big laughs and surprises that made the first movie so much fun.