Home » Movie Review: DON’T BE AFRAID OF THE DARK 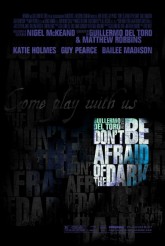 Longer on atmosphere than logic, this horror film feels curiously aimed at younger viewers, despite the gore and R rating

Audiences of a certain age have at least vague memories of the original 1973 TV movie DON’T BE AFRAID OF THE DARK, written by Nigel McKeand, which featured Kim Darby as a young woman using the flash cubes on a Polaroid camera to combat evil, light-fearing creatures that lived in the chimney and under the fireplace of an old house.

The new feature film edition, scripted by producer Guillermo Del Toro & Matthew Robbins and directed by Troy Nixey, greatly ups the budget and gore factors. There are also many more creatures this time around (if memory serves, the original had only three). The venerable manor where most of the action takes place is Gothic gorgeous – credit production designer Roger Ford and art director Lucinda Thomson, along with some stylistic flourishes that are characteristic of Del Toro – and there is a sustained sense of creepiness. However, both in structure and in tone, this DON’T BE AFRAID OF THE DARK seems more designed to scare children and teens than the more traditional R-rated horror audience.

In a 19th-century prologue, we see the master of Blackwood Manor lure a servant to the basement where he murders her in a failed attempt to save his son. Cut to the present. The house is now the property and habitation of architect Alex (Guy Pearce) and his girlfriend/interior designer Kim (Katie Holmes). Caught up in restoring the old place, the couple are thrown a wrench by the arrival of Alex’s eight-year-old daughter Sally (Bailee Madison). Sally’s mother (who we never see) has effectively dumped the child on Alex permanently. Alex and Kim try to make the best of it, but Sally is miserable. When she discovers the house has a basement, she points it out to her dad and to Kim, even though caretaker Mr. Harris (Jack Thompson) tries to steer them away from it. Then Sally hears voices from a grate in the cellar, promising friendship. When no one is watching her, Sally sneaks back to the basement and opens the grate.

At this point, a lot of questions arise. Sally is young, but surely (especially coming fromLos Angeles) she’s been exposed to enough pop culture to understand the concept of “supernatural” and “dangerous.” Then there are those moments typical to horror movies rather than real life or rationality where, even when characters know what’s happening, they behave without suitable care.

Then again, our antagonists often behave inexplicably. Granted, they are evil fairies and not evil rocket scientists, but they seem to skip several easy opportunities to grab Sally, in favor of creating situations that bolster her case with the adults around her.

On the upside, there is a real sense of wonder to DON’T BE AFRAID OF THE DARK. Everything is imbued with a sense of magic, whether light or dark, from the vine-emblazoned gates to the estate to the charming lantern in Sally’s room to a koi pond within a hedge maze. Madison summons a sense of real anguish and terror – having a child this young in mortal jeopardy is likely what prompted the R rating – and Holmes is very likable as the patient, kind almost stepmother who goes above and beyond. Naming her Kim after the original film’s Darby is a nice touch. Alex seems written as so simultaneously passive and tunnel-visioned that it’s hard to evaluate Pearce’s performance. He’s good when Alex is nervously trying to bond with his daughter. However, the movie is so completely uninterested in Alex’s ambitions, except to illustrate why he’s not a better listener, that whatever Pearce brings to this aspect of the role is almost literally pushed into the background.

Oddly, explanation works against the film. When Kim starts digging for information about the history of the house and what happened to its former owners, we learn exactly enough to make us wonder why some things happen and other things don’t. It’s also unclear exactly when the film is taking place. We see cell phones, but Sally doesn’t have a laptop, and where Kim has found an array of working flash cubes for her Polaroid is an occasion for great curiosity. The use of drawings to herald the actual creatures is charming, but again sets up more of a fairytale horror tone than a real horror tone. The design of the creatures when we see them up close, which we eventually do, is in keeping with some of what we’ve seen in some of Del Toro’s directorial work (as a reminder, he’s not the director here). The look and size of these malevolent sprites is more in keeping with a supporting menace than a primary threat.

There is fun to be had here, but the feel is more GREMLINS (minus the humor) than something that induces primal childhood dread. It may be that what scares us has changed too much in the last forty years for this to work now, or it may be that there’s a clash in intent and execution here. Either way, DON’T BE AFRAID OF THE DARK is fun and creepy in an old-fashioned Hammer way, but it never makes us truly afraid.

Click on Link: Interview with DON’T BE AFRAID OF THE DARK star Guy Pearce