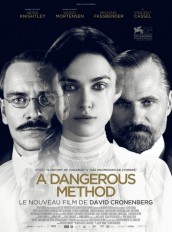 When the subject of witty, dry, cerebral movie comedies arises, David Cronenberg is not the first director who springs to mind. Nevertheless, he’s made a fine one with A DANGEROUS METHOD, about the making and unmaking of the real-life professional relationship and personal friendship between Sigmund Freud (Viggo Mortensen) and Carl Jung (Michael Fassbender) and how Jung’s patient/lover Sabine Spielrein (Keira Knightley) became Freud’s acolyte.

The subject matter may not sound like the basis for straightforward humor either (sans the EVERYTHING YOU ALWAYS WANTED TO KNOW ABOUT SEX farce treatment). However, screenwriter Christopher Hampton, adapting his play THE TALKING CURE, in turn based on John Kerr’s book A VERY DANGEROUS METHOD), has provided Cronenberg with a script that is sometimes dark but almost always droll, perhaps because so much of it is based on a clash of mighty egos between two historical figures.

In 1904 Switzerland, the hysterical, miserable 18-year-old Spielrein is brought in to the hospital where 29-year-old Jung is just starting out as a psychiatrist. Jung is fascinated by Freud, although the two haven’t met (yet) and opts to try Freud’s “talking cure” on his new patient. Spielrein, once she is able to express herself, turns out to be startlingly intelligent and self-aware. Jung begins corresponding with Freud, which leads to a meeting between the two men. Freud is flattered, Jung is thrilled – and both are delighted to have someone else to talk to who understands what they are trying to accomplish.

Then Freud asks Jung to treat another patient, Otto Gross (Vincent Cassel), who used to be a psychiatrist himself. In another sort of movie, Gross would be Hannibal Lecter. Here he’s just determinedly amoral. In any case, simply being exposed to Gross’ world view is enough to make Jung question his own, to the extent that he embarks on a sexual relationship with Spielrein.

Part of what comes next is a tale all too familiar to anyone who watches stories of marital drama, part of it is revelatory, and part of it is strangely hilarious, thanks to the way in which Cronenberg, Hampton and the actors approach the material. Freud and Jung, fathers of psychoanalysis that they are, can’t help but examine every word the other one utters, and then ponder its ramifications. Monty Python used to turn this sort of thing into farce, but by playing it straight, Mortensen and Fassbender seem like they really could be two men entangled in their own efforts to discern what’s really being said. The intentional comedy comes out of their earnestness, separate and joint.

It’s been a while since Mortensen has gotten to demonstrate comic timing in a role, but he still has it in abundance. His Freud is a contradiction: self-satisfied yet anxious, literal-minded yet inventive, closed to the hope of essential change yet ready to encourage growth in unlikely subjects. Mortensen is happily stuffy and pedantic, never commenting on what he’s doing and consequently is perfectly persuasive as well as wholly enjoyable.

The versatile Fassbender plays Jung as a more traditionally tortured soul, but one who suspects he’s complicit in his own discomfort. He convinces us of Jung’s intelligence and his ability to excuse himself.

Knightley is fearless as Spielrein. She finds the core of purpose in Spielrein’s extreme behavior, so that when the character goes wildly out of control, screeching, convulsing, choking on her words, it all seems like something a person in anguish would actually do, rather than random raving. When Spielrein settles down, Knightley lets us be happy for the woman, not because she’s able to rejoin society, but because she’s so fascinated by everything she’s learning.

While it is in no way a documentary, A DANGEROUS METHOD does provide the broad strokes of how psychiatry developed in its infancy, along with the personalities that shaped it. If nothing else, viewers will come away knowing the difference between Freudian and Jungian outlooks. More likely, most audiences will come away having had the good time that comes from a piece that is erudite, truthful and dark – and funny because of all of these things.