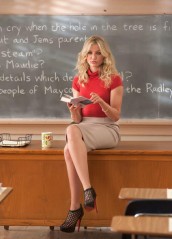 The actress talks about bad teachers, her ex Justin Timberlake and pushing the envelope 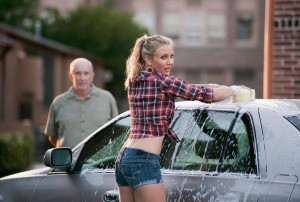 Cameron Diaz plays a very bad teacher in her new comedy BAD TEACHER, but the 37-year-old actress likes to have fun and keep things as simple as possible in her real life. No bad blood between exes and not exactly in a rush to ever get married, Diaz says she is very content with how her life was, is and most likely will be in the future. As life evolves, so does she.

The actress takes five to chat about her new film and working with her ex Justin Timberlake on the hit comedy.

On working on BAD TEACHER…
“We kind of knew going in that it was going to be a good time cause Justin and I share the same kind of sense of humor,” says Diaz. “Knowing that we were going to kind of be working hard for comedy’s sake. We had such amazing people around us, [director] Jake Kasdan, Gene Stupnitsky and Lee Eisenberg who wrote the script, and all the other actors who were so amazing, to just have all that support, and for us to get to play all together, was a lot of fun.”

On working with her ex Justin Timberlake…
“We’re just bigger than everybody else,” Diaz says with a laugh. “We can rise above it all. Justin and I, we had a journey together, and we continue to have a journey together. It’s changed, I’m okay with that, he’s okay with that, I love this man and I’ll always love him in so many different ways. Love evolves and it’s a wonderful thing to be able to share that with somebody who you really care about to make a movie with. I love Jake in a different way and I love Justin and I love everybody else on that movie. I’m not mad that we are not where we were the first day we met each other and I’m glad we are not where we were the last day we said goodbye to each other. I’m grateful for where we are at right now, which is wonderful – a friendship and partnership in this movie. We made it because we wanted people to laugh, and that is such a gift that we can laugh together. And if we can share that with the world, why wouldn’t you do that? I think we are kind of funny together.”

On ever having a teacher throw something at her…
“My sister had a teacher, Mr. Henderson, who used to threaten the kids that he was going to send them out of the classroom on a gurney,” says Diaz. “And he would hit their table with a ruler, and he was pretty aggressive, her sixth grade teacher.”

On pushing the envelope with her next comedy…
“There’s all different ways to make people laugh, I don’t consider this the only way and then I have to take that to the next extreme,” says Diaz. “I mean, I did this ‘cause this was a unique opportunity. You don’t get a script like this everyday, and I don’t think that there’s going to be another one near to this for a very long time. I’m doing a comedy right now and it’s a completely different comedy.”

On her ex Timberlake’s secret talent…
“Something that Justin’s really talented at is manicures and pedicures,” Diaz says with a laugh. “Put your feet in a hot tub, let him take hold of them and you’ll have sparkling little mani’s and pedi’s.”