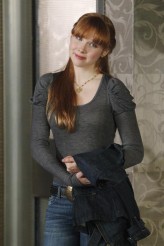 The actresses talk about playing Castle's mother and daughter, respectively 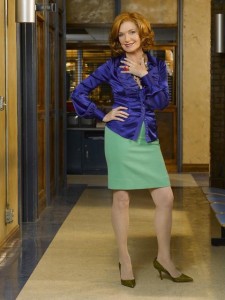 Richard Castle (Nathan Fillion), mystery writer extraordinaire, is enjoying his third season of crime-solving on ABC’s Monday-night hit CASTLE. Castle is able to beguile most women – even Kate Beckett (Stana Katic), the prickly NYPD detective he follows around for inspiration, is beginning to fall for him.

But there are two females Castle can’t sneak anything past – his much-married Broadway actress mother Martha Rodgers, played by Susan Sullivan, and his bright teenaged daughter Alexis, played by Molly Quinn. They keep Castle honest and allow him to show enduring love and loyalty in his home life, even as he has a lot of love ‘em and leave ‘em situations elsewhere.

Sullivan is a real-life veteran of Broadway and TV (she was a regular on FALCON CREST), and Quinn, even at the young age of 17, has an extensive resume that includes the motion-capture A CHRISTMAS CAROL with Jim Carrey. The two women exhibit affection for each other that seems genuinely familial, as evidenced by Sullivan beckoning Quinn over to join in partway through what starts out as a solo interview.

ASSIGNMENT X: Were you looking for a series when CASTLE came along?

SUSAN SULLIVAN: You know, I was – and I say this to all actors – as you go along the road, you have to stay well-oiled. I was doing a play, and playing a part in this play very much like this character. Actors want to act, so that’s sort of the bottom line, and this is perfect, because at this point in my life and career, I sort of like a couple of days a week. It’s perfect. She comes in, she says a couple of little quippy things, hopefully they’re amusing, and she leaves.

SULLIVAN: Oh, good, good question. I am. This is a character who started young.

AX: Do you, like your character, actually have kids who are off doing outrageous things?

SULLIVAN: No, but I have a mother. I’m sort of basing this part on my mother and last year, after we had done the pilot, I was doing a play in New York, BUFFALO GAL, which was about a mature actress, and I lived with my mother. This is part of what interests me about this part. I want to create a character where you go, “Oh, that’s how you stay in the game at [that age].” This is a bit of an homage to my own mother and of course as I spent six months living with my mother as I was doing this play, I discovered I am my mother. Big surprise. I guess we all are. And it was interesting. Because things that I thought, “Well, I don’t do that,” and then I saw my version. The paradigm shift is just slightly to the left, but there it is, same-old, same-old. So I really have learned a lot from doing this part.

AX: Does your mother react to your acting the way Martha reacts to Rick’s writing?

SULLIVAN: Well, she’s a little like that. He’s gone, but my father was the critic. And I’ve internalized the critic and when you’re a critic, it’s very hard to stop it.

AX: And parents feel that they’re –

SULLIVAN: “I’m helping, darling. Get over it.” 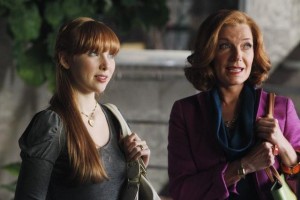 AX: At this point, actress Molly Quinn appears. Sullivan beckons her over.

AX: How is it playing grandmother and granddaughter?

MOLLY QUINN: I really like it. I love Susan as a person, and as my grandmother, it’s even better. I just –

SULLIVAN: I don’t like this word “grandmother” – I wanted them to soften it a little with something, but they insist on saying it [laughs].

QUINN: We just want something a little classier, I think [laughs]. Because she doesn’t want to be a grandmother – she doesn’t see herself as old. I mean, does she have children? No, not yet. She’s younger. So …

SULLIVAN: Well, I absolutely adore Molly. I don’t have [real-life] children, so this is one of the great gifts of being an actor – you have all these wonderful children who go home and are on their own and being taken care of by somebody else. So here she is – brilliant, charming, beautiful and smart.

AX: Are you the same as your character Alexis?

QUINN: I believe Alexis is a year older than me.

AX: Do you feel that your characters function together on the show? 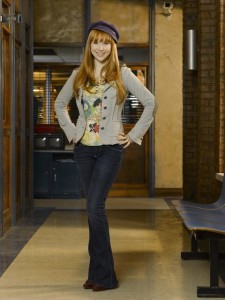 SULLIVAN: Yeah. We’re a Greek chorus and a team.

QUINN: I have to agree. We really are a team, and as dysfunctional as we try to appear, we really are so cohesive. We have the fun and the serious and the smart, so we’re really a complete group.

AX: Are you finding it difficult or amusing to act like you’re in New York while filming in L.A.?

QUINN: That’s true. It was really interesting, especially moving from Texas to L.A., and then playing someone from New York, and when we did the pilot in New York, I had never been there, so that was huge, especially doing the show now, is being able to be there a little bit and know the sights and places we were supposed to be when filming here, so there really is a different beat to it and a different mindset, like what we consider dressy here and what they consider dressy there – here to go out, maybe a nice pair of jeans. In New York –

SULLIVAN: They don’t dress, really, the way they used to. In my day. I remember gloves. I even remember a hat.

QUINN: I love gloves. That’s like my dream, to go to the Derby. I should wear gloves.

AX: Did you have trouble with the accent when you came here?

QUINN: No. I didn’t have an accent growing up. I had three speech impediments.

QUINN: Yeah. So I went to speech therapy. They were “T,” because I would say [she inhales before pronouncing the consonant], instead of just [makes “T” sound] and also “S,” because I pushed them, and the other one –

SULLIVAN: Wait a minute. Is this a speech impediment or is this wanting to be a perfect speaker?

QUINN: No, these were speech impediments. That’s why I was in the business at a very young age.

SULLIVAN: But were you in the business at a very young age? 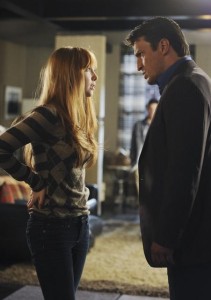 QUINN: I started taking acting lessons when I was seven, but I really wouldn’t consider that being in the business. I just loved performing, because I had a very large family, and it was just fun being someone else. I was always really imaginative, [but] I didn’t get into the business until I was turning thirteen. I really did study. I went to Dallas before I came out here [to Los Angeles], and people always said, “Well, was it just that one year in Dallas that you studied?” No. I knew the Uta Hagen method when I was seven years old. It was not just a quick thing. It was a very sturdy and a very rigid upbringing.

AX: Can you talk about your favorite CASTLE episode or scene so far, in terms of your characters?

SULLIVAN: Well, I liked [Martha] being a life coach and I hope they keep that up. I know all these actor friends of mine – women, mostly – who are life coaches because they can’t get a job.

QUINN: Oh, that’s difficult. Of course, the [first-season] prom scene was fun, that was really nice, but I really enjoy when Alexis gets involved with the cases, like when she figures things out. And I have to say, my favorite scene is probably in “Little Girl Lost,” I think – she gets up and they’re talking about the rabbit and it’s a really sweet interaction late at night between her and her dad, how she is really, genuinely interested in what he does.

SULLIVAN: But I think what’s interesting is, they use these characters, his home life, as sort of counterpoint to the main mystery, and that something in his home life resonates on an almost unconscious level with what’s going on in the mystery. We’ve got a very smart writer [in series creator Andrew Marlowe].

AX: Do you feel like part of the function of your characters is to show a different side of  Castle’s character?

SULLIVAN: That he’s a rounded person.

QUINN: Yeah, that he has a home life, that he’s not that bad boy image.

SULLIVAN: But I think it’s really interesting how they use the home story. It’s always balancing off of the mystery. There’s always a tie-in, sometimes more subtle than others, sometimes more on the nose, but it’s kind of fun for people who watch to be aware of that.

AX: How do you like working with Nathan Fillion?

SULLIVAN: I adore him [laughs]. I absolutely adore him. On these kinds of shows, shows that go on for a period of time, the essence or the soul, if you will, to sound a little grand, of the actor is what you start to see and if you think about the characters that you like, you’re liking who that person is. Not the character that they’re playing – the person that they are. That’s what evolves over a very short period of time. So Nathan is that charming, impish, bad-boy, good-boy, kind and compassionate man.

QUINN: He really is. You took all the words. Now I can’t say anything [laughs]. I just fell in love with him when I first met him in the chemistry read. I was like, “Whatever I do, I have to work with him.” And luckily I was on this show and I got to meet Susan and everyone else. It was just a really great cast. Nathan’s a gem.

AX: Do either of you read and/or watch mysteries recreationally?

SULLIVAN: That’s not my style at all, although I did love Nancy Drew when I was your [Quinn’s] age.

QUINN: I was a real HARDY BOYS fan, to be honest, but I like MISS MARPLE. She had to be my favorite. I would sit watching all of these reruns of MISS MARPLE. Reading mysteries? Not too much. I read THE WOMAN IN THE WHITE DRESS. That was a really interesting mystery.

AX: How was it working with director Robert Zemeckis on A CHRISTMAS CAROL?

QUINN: Wow. That was so great. He was such a down to Earth guy. I’ve never had a bad experience on any set I’ve ever been on, so I really loved meeting him, especially because he did FORREST GUMP, CAST AWAY – he was a sweet man. He was really great with the kids. It was motion-capture. You really have to use your imagination. My main character, Belinda Cratchit, she looks exactly like me, down to three little scars I have on my forehead, and then I play two other characters. One of them is actually a grown man and one of them is a child, so for those, you don’t recognize me. I’m in disguise. I play Robin Wright Penn’s daughter also, so they replaced my face with hers.

QUINN: CASTLE’s the best show ever.

SULLIVAN: Yes. And pay attention to your mother.