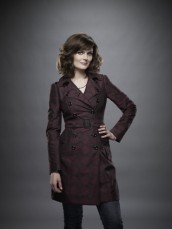 The actress talks character evolution and her favorite Season 5 episode 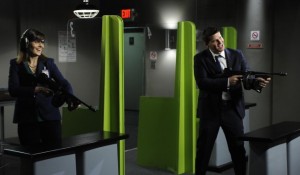 Now in its sixth season, BONES (which airs Thursday nights) has proved a reliable hit for Fox. Based on books by Kathy Reichs, the show is a combination of detective procedural and romantic comedy/drama. Emily Deschanel plays Temperance “Bones” Brennan, an internationally revered forensic anthropologist who could give Mr. Spock lessons in logical detachment. Her interactions with her crime-solving partner, David Boreanaz’s emotion-based Seeley Booth, form the backbone of the show.

Lately, Brennan has been getting more in touch with her feelings. Although she rejected Booth’s suggestion that they pair up personally at the end of Season Five, this year, Brennan tells Booth she thinks she made a mistake. Unfortunately, Booth is now living with another woman, though we can tell his feelings for Brennan are stronger than he’ll admit to himself.

Actress Deschanel, raising her voice a bit to be heard over the rides at the Santa Monica Pier where this interview was conducted, talks about where she feels Brennan has been and where she may be going.

ASSIGNMENT X: Why do you feel that Brennan could not cope with Booth’s suggestion that they get together? What was your interpretation of that moment? 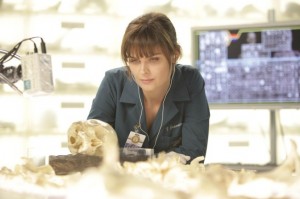 AX: How did you feel about how last season ended, with all of the main characters scattered?

DESCHANEL: I think each season ender is made worth it by the season opener of the next year, and I think it makes an interesting dynamic between everyone, that everyone’s leaving. Absence makes the heart grow fonder, and so we catch them seven months later and we have to come back to help out a friend, so you see how that dynamic has changed. I think it works.

AX: Here’s a rather nitpicky question about the depiction of Brennan’s attitude towards animals on the show. Are you a vegetarian in real life?

AX: There was the one episode where a pig had been shot for a luau and Brennan was very indignant about the animal’s death. A few episodes later, Angela’s trying to save an individual pig and Brennan has to be convinced that Angela’s efforts are worthwhile. Did that seem a little contradictory to you?

DESCHANEL: I think that humans are contradictory all the time [laughs]. I did find it contradictory, but I like to look at contradictions in the character and then assess whether I can believe that, and I believe [series creator/show runner] Hart Hanson and I had a conversation about it and I think there are reasons why she felt one way at one time, but there’s reasons why she would separate herself from one thing to another. I think she doesn’t eat meat, she’s a vegetarian for health reasons, and she was upset at how the pigs were killed, but she doesn’t have as much sympathy for animals as, say, Angela does. We’ll see how she evolves and see how she changes, but there’s always a reason why she’s one way or another. 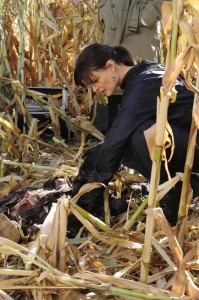 AX: Over the hiatus, you did a film where you played Kathleen Turner’s daughter, THE PERFECT FAMILY. How was that experience?

DESCHANEL: It was great. It was great to work with Kathleen Turner, and Jason Ritter, who I’ve known since we were kids, so I’m really excited. I’ll be very curious to see how it turns out, because you just never know when you’re working on something – you have many hopes and you feel like it goes well, but you [don’t know]. I look forward to seeing it and hope that gets to the festivals.

AX: Do you have a favorite scene or a favorite episode from this season?

AX: How about from Season Five?

AX: Is there a way that you feel Brennan is evolving, or you hope she will evolve?

DESCHANEL: Yeah. I think she’s evolving to be more open and emotionally accessible and more sensitive and kind of breaking down those walls that she has, and I think that’s the right way to go. She’s also becoming more aware of popular culture and she’s living in the world like a human being, like most people live in the world.