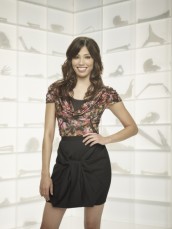 The actress talks about her new movie THE LINCOLN LAWYER, plus all about Angela 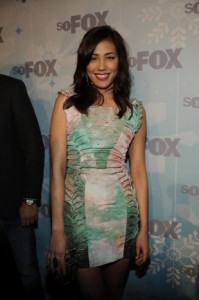 BONES star Michaela Conlin at the Fox 2011 All Star Party during the 2011 Fox Winter TCA event at the Villa Sorriso in Pasadena, CA | ©2011 Fox/Mark Davis

Michaela Conlin is in her sixth season of playing Angela Montenegro, the artist who reconstructs what corpses looked like as living humans, on Fox’s hit BONES (Thirsdays at 9 PM). While Angela works with forensic evidence, she’s not a pathologist like her good friend Temperance “Bones” Brennan (Emily Deschanel), nor law enforcement like FBI Agent Seeley Booth (David Boreanaz).

However, this week, audiences will get to see a whole different side of Conlin as she plays LAPD Detective Sobel in THE LINCOLN LAWYER, based on Michael Connelly’s novel, which opens Friday.

Conlin is very excited about both gigs, as she tells us in the exclusive interview.

ASSIGNMENT X: What’s your character like in THE LINCOLN LAWYER?

MICHAELA CONLIN: I’m playing a homicide detective. My partner is [played by] Bryan Cranston [and the film stars] Matthew McConaughey. [The director] is Brad Furman. I’m so excited. It’s been awesome.

CONLIN: He’s a joy. He is so open and kind and generous and I don’t have enough good things to say about him, honestly.

AX: Did you do any research to play a homicide detective?

CONLIN: I did. I followed a few female LAPD around, which was really great, and it’s been quite an experience, doing both things [THE LINCOLN LAWYER and BONES]. I was doing both at the same time for a moment, but it’s been great.

AX: Coming back to playing Angela the artist on BONES after that, would you like to get a little more involved in the physical side of things, or are you happy that they don’t have you getting into too many fights and getting buried alive and all that sort of thing?

CONLIN: [laughs] I’d love to kick somebody’s ass on the show. That would be fun. I think Angela’s ripe and ready to knock somebody’s lights out.

AX: Did you have to do any research in order to portray Angela doing her job?

CONLIN: I took some painting when I started, because she’s a painter, and I had never taken that. I just need to come to work and be really bawdy and honest, actually. Angela says it like it is, so that’s sort of my job there.

AX: Angela also has some softer aspects where she sometimes connects with …

CONLIN: The victims, yes, absolutely. She’s the heart of the show, as Hart Hanson, the creator of the show, has stated. Literally, they’re looking at the bones, and I’m like, “Yeah, but this was a person, people.” I like that she’s a person who actually gets to feel something.

AX: There was an episode in one of the early seasons where Angela was working with a dying little girl, doing art with her on the computer …

CONLIN: It was a beautiful episode. I loved the actress who played that girl, and I loved that the young girl was an artist and Angela could relate to her. I think it’s really nice that there are so many scientists in the lab and that Angela comes in and is not the scientist. I think that’s a really important part of the show. Because there’s so much science that it’s nice to come in and be like, “What the hell are you guys talking about?”

AX: Do you have other favorite episodes?

CONLIN: They’re all pretty much favorites of mine. I still love the Christmas episode from the first season. I really loved doing the hundredth episode flashback, when we all had to get our old hair and our old makeup [from when the series had started].

CONLIN: Much to her chagrin, I think she’s getting used to it. I’m not actually that grossed out by it. The thing is, if they actually smelled badly – in real life, obviously, they smell. Ours obviously don’t. It just sometimes makes me stop and [think] about what’s in our bodies, because if you break your leg or you break your foot, we will be able to find you if you die on the side of the road [laughs]. I think just that when you break a bone, there’s just so much history and so much memory imprinted on our bones, I had no idea. A friend of mine broke her foot and I was like, “We’d be able to i.d. you for days.” It’s kind of amazing, the imprint of life that your bones carry. That’s really impressed me.

AX: Having played Angela for years, do you now look at something that’s broken and imagine what it looks like whole?

CONLIN: Totally. In fact, I just dropped something the other day, and as we were putting it together, I was like, “This is really weird.” I’m like, “If we put this this way …” Your work does get in [to real life], so I’m glad about that.

AX: How would you describe Angela’s relationship with Jack Hodgins, played by T.J. Thyne, which has been on-again, off-again and has now resulted in marriage and a pregnancy?

CONLIN: I think they really, really love each other a lot and I think they’re going to see what it’s like to have a life together. I know that it’s not going to be always easy, so it’s going to have its ups and downs.

AX: For awhile there, Angela was having a pretty tumultuous romantic personal life …

AX: Not Brennan, though.

CONLIN: True. I don’t think that’s going to happen, though. I think they’re just good friends. I think they should definitely stay that way. I mean, I love that it’s real. My friends in life have very complicated relationships in their own love lives, so I’m glad that it’s not a false reality of that. I’m glad that it’s a realistic perspective. The thing is that Hart Hanson writes for women very well and it’s very rare that a man can write for a woman honestly. He writes how women talk. That’s something about the show that I really, really like.

AX: In real life, Emily Deschanel feels very strongly about the issue of animal rights. You had an episode about a factory chicken farm, and another episode where Angela rescued a pig …

CONLIN: In that episode, it was interesting, because we switched places essentially. Not that I would ever take a side against animal rights, but it was interesting to be in Emily’s shoes. Emily I think provided some of the footage of the caged chickens and the birds. It was kind of interesting to do a scene [dealing with this subject] with her, because she’s such a big activist. But no, I am not a vegetarian. I thought they really handled it beautifully. They weaved in something that was important to her without beating it over the head. 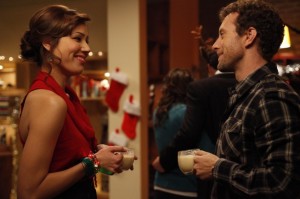 AX: Is it easier playing opposite T.J. Thyne as Hodgins when Angela and Jack are securely in love or when they’re sort of trying to figure out where they are with each other?

CONLIN: I think both are equally challenging, to be honest. I think there are certain difficulties and advantages to when you’re in love, and also when you’re not. It’s a tricky thing all around.

CONLIN: They did. I’m still shocked. If you looked Angela up in the dictionary, “marriage” is probably the last word that you’d find, so it’s going to be interesting. I think it’s going to be fun. I’m not nervous about it. I do trust Hart that [the writers] had enough time to think it through and we know the characters well enough that I trust them implicitly.

AX: Were you told they’d be getting married before you got the script for that episode?

CONLIN: Yeah, we knew what was going to be happening.

AX: That happened right about the time there was a big schism between Brennan and Booth. Do you think the writers felt they couldn’t have Hodgins and Angela and Booth and Brennan all be romantically miserable at the same?

AX: Did you start this season knowing Angela was going to become pregnant?

CONLIN: Yes, I did hear a rumor, and the rumor became true.

AX: Have you done any research into pregnant people?

CONLIN: No, I just have a lot of pregnant friends, so they guide me in their wacky food urges and their moodiness and their hormones.

AX: Do you feel like you have a particular acting vibe with T.J. Thyne?

CONLIN: Ask him that [laughs]. He’s a very good friend and we’ve known each other for a long time, so he’s sort of my acting partner. We really have a great time on set together. It’s fun.

AX: What’s been the most surprising aspect of Angela for you? 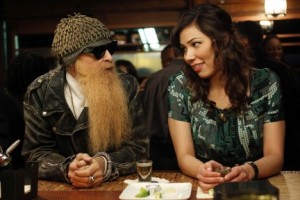 AX: Were you surprised to when Billy Gibbons of ZZ Top was cast as Angela’s father?

CONLIN: You know, my real father is so impressed by that, because he loves him [Gibbons] so much. I was shocked. I mean, Billy Gibbons is the coolest guy, really lovely, really personable and kind, but my father was so excited about it, because he loves him, so it was fun to be like, “Dad, you’re not playing Dad, but this guy is.”

AX: Has playing an artist inspired you to do any graphic art on your own?

AX: Has any of it been published?

CONLIN: No. I’m very shy about it, actually. None of it’s been published. I kind of hoard it and keep it to myself [laughs], but hopefully, one day. I’m starting to think about [making] movies for the hiatus. I just met with somebody about starting to produce.

AX: What kind of material do you want to produce?

CONLIN:  Movies with a lot of female roles and small budgets and interesting storylines.

AX: Would these be projects that you’d act in?

CONLIN: Not probably right now, no.

AX: How is it playing a character for as long as you’ve played Angela?

CONLIN: I’ve learned so much from the show, just learning how to deal with the dynamics of a long-running series. It’s like a marathon instead of a sprint. Once you’ve been an actor for a little while, with the ups and downs, to get [this many seasons], it’s like winning the lottery, literally. So it’s been amazing to come back and have the freedom to work in a capacity that’s really fun. It’s been great.

AX: Do you think BONES will get a seventh season?

CONLIN: I think we’ll be back next season. They [Fox] are really supportive of us. We have a great following and we all knew that there [is] love on that end.

AX: Anything else we should know about BONES and/or Angela?

CONLIN: They’re both having a lot of fun! I’d like to say that it’s been really great to play an intelligent woman on television. It’s great to have been given that opportunity.