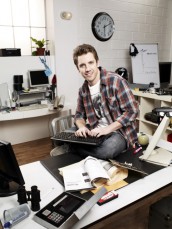 The actor chats about his recent half-hour comedy, which unfortunately was canceled last week 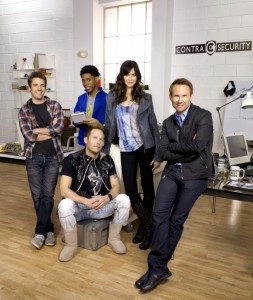 Fox’s half-hour comedy BREAKING IN, trying out a Tuesday slot tonight after a run Wednesdays at 9:30 PM (even though it was canceled last week by Fox), concerns a high-tech security firm that is hired by various companies to evaluate weak points by, per the title, breaking in wherever it can be done. Bret Harrison plays Cameron Price, the firm’s newest hire, who has been more or less blackmailed into taking the gig by the firm’s mysterious boss Oz, played by Christian Slater.

In some ways, Cameron and his situation don’t appear too far removed from Portland, Oregon native Harrison’s gig as the beleaguered Sam on two seasons of the late, great REAPER, where he played someone literally working for the Devil. Slater’s Oz would seem to be only devil-ish (as far as we know, anyway).

ASSIGNMENT X: Do you see any similarities between Cameron, or even BREAKING IN, and REAPER, because in a way, it’s like you’re still working for … the Devil!

BRET HARRISON: Yeah. Absolutely. I do find similarities in a lot of the roles I’ve played over the last few years are guys who are working under somebody who doesn’t want [to be in that situation] – even with THE LOOP that was on Fox a couple years ago, same thing. I’m working this job, but I’m playing Wile E. Coyote, I’m being tossed around all over the place, but I think this show [BREAKING IN] compared to REAPER specifically is much more grounded, in that it is an office comedy. You’re not dealing with vessels and souls and the Devil. 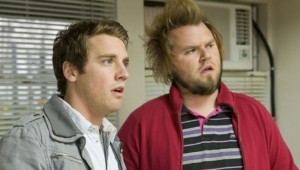 We did some crazy things on REAPER, because you’re dealing with the unknown and I think the humor in this is a little more grounded because we have a caper one day a week that we’re shooting, I think it’s a great mixture. Somebody asked how are you going to do a half-hour action show – honestly, I think the reason it’s so cool is there is nothing like that on TV. It will be a challenge, but think about GET SMART. That was a half-hour [where, in the ’60s, when spy comedy had not been done] they were using gadgets and high-tech stuff. To me, a lot of times, with REAPER, the comedy would get tossed away a little bit more.

AX: Do you see any similarity in your characters – guys who are decent people who get dragged into situations working with not-necessarily-decent people?

HARRISON: Absolutely. It’s a two-fold thing, though. Part of it is, you get dealt a handful of scripts. It’s pilot season. A, this was certainly the best comedy I read that I was personally excited about. There were some other shows that are already on the air now that – I mean, you don’t ever know, but you have a feeling, depending on the network, you can play the odds and go, “What’s the numbers game, how well is NBC doing with this?”

I knew this [BREAKING IN] was going to be the harder battle, but for me, it’s about, I read a script and I go, “What’s my day to day? What am I doing day in and day out, if it was to go for five years?” For me, it’s like, oh, these are the people I want to be involved with. [BREAKING IN co-creator] Seth Gordon is an amazing director, [other BREAKING IN co-creator] Adam Goldberg – I was working with guys that I look up to and actors that I wanted to be around. I know it can look a certain way, like, “Oh, you’re always playing these same characters,” and I’m really great at being awkward [laughs]. Part of it is just my age.

And I know that’s just kind of a really simple answer, but I hope that as I get older, I’ll look [like] – Jeff Bridges, TRUE GRIT. That guy is the coolest-looking older man. And I don’t know if you’ve seen BLUE VALENTINE. Ryan Gosling giving himself receding hairlines because he’s playing a character who is a couple years older, which is cool, but every actor wants to be the man. And I think, you know what? I’m going to play to my strengths and my abilities the best that I can, because that’s what’s going to get me over the hill to do the next thing.

AX: Well, you certainly have one of the best “What the hell is going on?” reactions on TV at present.

HARRISON: [laughs] Yeah. If you grew up in my household, you would, too.

AX: Can you talk a little bit about what you would have liked to see REAPER Season Three be or what you heard it might have been?

HARRISON: Yeah. I would have liked to have finally gotten to go to Hell. [laughs] I know it sounds hilarious, like, yeah, I wanted to go to Hell, but I did. I would have loved to see what that world was. Again, it’s a TV show, so you never know what those sets are going to look like – I mean, part of why they left Hell out, I think, is that it is something that’s great to leave to the imagination, but I would have liked to by Season Three have everybody involved with the Devil, as opposed to just me. I think that would have been a lot of fun to have [Sam] and I don’t know what it is, I’m not a writer, but I think getting out of the contract [with the Devil] in Season Three would have been [interesting] – you always say, “Well, if you get out of the contract, then the show’s over,” but no. What is that show [if the contract is gone]? I think the greatest shows are where they throw it all at you. In DEXTER, when they killed Rita, everyone was like, “Oh, show’s over, what’s going to happen?” But I think shows more nowadays need to go to those places quicker, because it challenges you. And of course, if they don’t hold off so long.

AX: What would that place be on BREAKING IN?

HARRISON: Well, the first thing that comes to mind is [the possible romance between] Cameron and Melanie [played by Odette Annable]. “Just go there, just go there!” Not with that, but I think it depends on what our capers of the week are. I think if we can, and I don’t know the politics or the money or whatever, but I’d like to go for the biggest, most grandiose thing we can go for, even though it’s half an hour and we only have one day to do it, I mean, let’s go, let’s have some fun and get crazy.

AX: Do they have you doing a lot of the MISSION: IMPOSSIBLE descending from the ceiling on a harness stuff?

HARRISON: Yeah, when me and Odette did it, when we descend down, we descended on ropes and we wanted to do it – I didn’t really want to do it, but if Odette’s doing it, I got to do it.

AX: Not that you don’t work with the other actors in drama, but is there a little more intensity as far as everybody’s timing in comedy?

HARRISON: Yeah. You always hear about timing, but I think it’s more about finding where the joke lands, finding what is funny in the scene, because one thing might be funny to somebody else, it might not be [funny to you]. What’s great working with Christian is, every single take is different. He has a very wry sense of humor, so you don’t know what’s coming at you, which in turn, you’re going to get another take, and as an actor playing opposite him, it’s so great, because I’m constantly on my toes. I don’t know – “Oh, whoa, it was written like this, but you’re going here. All right, that was weird, I liked that!” Look at Judd Apatow and those guys. They’re doing weird.  The reason they got so big is they were doing things that nobody else was doing. I think that movies, anything, can be something that you’ve seen, you might have seen it over and over, but what separates anything is, “Oh! I haven’t seen that take on a joke. That was the same joke in this last movie, but he did it way different.”

AX: Where do you shoot BREAKING IN?

HARRISON: We shoot on the Sony lot. We’re here in L.A. The writers are here and thank God. I don’t see how you could do a half-hour comedy in Vancouver or wherever else they ship you out to. You feel much more a part of the group in a comedy. I don’t think you could do that if you were somewhere else [geographically than the writers]. 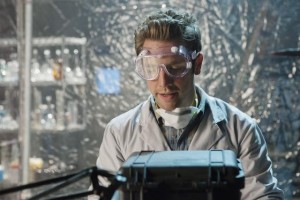 AX: You had a recurring role on V, which had the writers in L.A. and production in Canada …

HARRISON: My [time] on V was great. I think more than anything, I have to say about V was how cool the cast was, how cool those people are as human beings. I’ve never met nicer people. Elizabeth Mitchell is one of the sweetest people I’ve ever met. I had a great experience. I loved going back and forth from Vancouver – we’d shoot for a couple days and then go back.

AX: On BREAKING IN, do you guys ever compare notes on working on cult projects? You’ve all got genre backgrounds, Christian Slater’s done a lot and Alphonso  McAuley seems to just have geek street credentials.

HARRISON: I think so. We all kind of geek out. I certainly geeked out when I found out Mr. Slater was doing this. All the time, I’m feeling like, “All right, don’t geek out. Don’t bring up TRUE ROMANCE.”

AX: Anything else you’d like to say about the show?

HARRISON: Yeah. I’d like to say that BREAKING IN is really cool. I think it’s really original and I think we’re trying to defy the odds and do things that no other comedy’s doing in terms of getting action in the half-hour.

Leave a Reply to Christine Ashworth