CD Review: YOR: THE HUNTER FROM THE FUTURE soundtrack 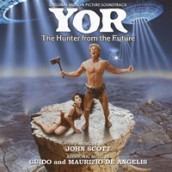 CD Review: YOR: THE HUNTER FROM THE FUTURE soundtrack

Where they ripped off American westerns with an refreshing dose of spaghetti in the 1960’s, the Italians had a far less successful (if hilariously entertaining) go of doing their own “salutes” to CONAN and STAR WARS in the ’70’s and ’80’s. However, in an exploitation coliseum that included the likes of ATOR: THE FIGHTING EAGLE and STARCRASH, few rip-offs stewed savage beefcake with helmeted “space” invaders like 1983’s YOR: THE HUNTER FROM THE FUTURE. Reb Brown (TV’s Captain America) was cast as the dino killer who makes his fellow cave people safe from dinosaurs and badly dubbed future aristocrats in a film saluted by the Razzies as one of the 100 most enjoyably bad movies ever made (though YOR was actually a cut-down Italo mini-series). So just what the heck is THE SHOOTING PARTY’s John Scott doing amongst these paper mache lizards and hapless, wannabe storm troopers?

Though Scott’s beautifully bucolic, William Walton-influenced orchestral style filled such high-minded fare as ENGLAND MADE ME and THE SCARLET TUNIC, the composer also wasn’t adverse to gracing the entertainingly silly, English language likes of THE PEOPLE THAT TIME FORGOT and KING KONG LIVES. While YOR might not have the pedigree that Scott gave to another primitive hero named Tarzan in GREYSTOKE (let alone have its music performed with as much finesse), his muscular score for YOR delivers the Saturday matinee goods. Sure he might be scoring cheese here, but at least Scott goes about it with absolute, if sometimes winking commitment, his orchestra leaping onto stegosauruses and blasting evil overlords with the trumpeting thrills, spills and well-chiseled heroic themes, all of which make YOR a fun entry on his otherwise respectable resume.

Scott’s talent and pedigree aside (as most of his actual score was brushed to), what truly makes this album a huge kitsch delight is the “additional” music by the brothers Guido and Maurizio De Angelis (sometimes singularly known on American screens as “Oliver Onions), the composers of such other insane Italo rip-offs as 2019: AFTER THE FALL OF NEW YORK and KILLER FISH. While they no doubt did competent work in their prolific careers like TRINITY IS STILL MY NAME!, YOR isn’t exactly one of them. But that isn’t to say their ineptitude here isn’t great fun, from their evil synth stylings to lamentable attempts at Vangelis, or Casio-disco action. But nothing matches the hilarity of their chorus singing with triumphant, unintelligible lyrics for YOR’s finest moment, as our dino-slayer fashions a hang glider from a pterodactyl to fly to the rescue in “The Final Battle” (it actually just might be the most jaw-dropping moment in film scoring at that). This chorus even gets reprised for the unforgettable end song “Yor’s World,” complete with A Capella cave man chants. Hearing the singer desperately trying to get a handle on the English vocals of his longhair disco power ballad, and you’re reminded of all that is great about really bad scores. Be sure to check out the movie itself, which has just gotten an on-demand DVD release at Wbshop.com to experience one of the great jaw-dropping camp films.